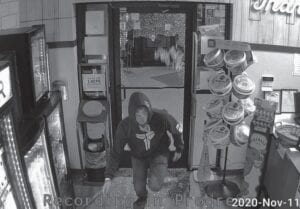 Whitesburg City Police released the surveillance photos above and below after the Food City Wine and Spirits Store was invaded by two thieves crashing through the store’s glass door.

Whitesburg Police have arrested a 21-year-old man and charged him with breaking into Food City Wine and Spirits.

A juvenile was also involved in the burglary, which netted the would-be thieves nothing for their trouble, Fields said.

He said the two broke through the glass door of the liquor store at 11:58 p.m. on November 11, and then proceeded to grab high-priced liquor off the shelves.

“I don’t believe they got anything because they got greedy and tried to get a bunch of stuff, but they ended up dropping a bunch of it and busting it inside the store,” Fields said. “What they did get, they dropped on the sidewalk.”

McFall is now charged with four felonies: second-degree burglary, first-degree criminal mischief, theft by unlawful taking from a building (more than $500, less than $10,000), and second-degree unlawful transaction with a minor. 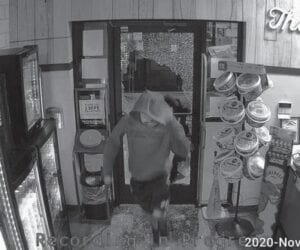 Fields said the minor who was involved in the burglary is about 15 years old.