Liquor, moonshine gets poured after taken from vault 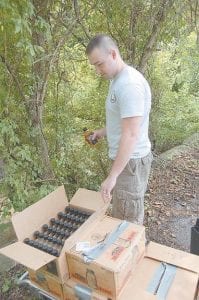 The Letcher County Sheriff ‘s Department poured out about 26 gallons of old moonshine and halfpint bottles of liquor, mostly bourbon whiskey, that had been stored in an evidence locker.

Letcher County Sheriff Danny Webb said the moonshine and liquor was about five years old and no longer needed to be kept as evidence because the criminal cases involving the contraband had been settled.

“We just didn’t want to keep it,” said Webb, who has been busy cleaning out the evidence room in his old office in the Letcher County Courthouse. “There was no reason to keep it so we decided to destroy it.”

The sheriff’s department recently moved from the courthouse to the old Letcher County Health Department building on Broadway Street. Webb said he is organizing a new evidence locker “one item at a time.”