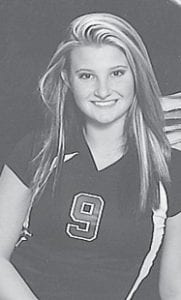 When you end your junior season playing in the state volleyball tournament and being chosen for the first team All Southeast Kentucky Showcase team, it tends to verify you are one of the top players in the area on one of the best teams.

Such was the case last season with Lisa Frazier. The Letcher County Central Lady Cougars lost in the first round of the KHSAA State Tournament last year, and Frazier was selected to the Southeast Region First Team. She enjoyed an outstanding junior year as her team finished the season with 34 wins and only three losses.

Now what do you do for an encore?

You come back for your senior season with high expectations to surpass what you did as an individual and as a team the year before.

The 2010 version of the Lady Cougars volleyball team won 29 of 34 games this season and advanced to the state tournament for the sixth consecutive year.

Frazier has flourished, especially the last half of the season, as the leader of the Lady Cougars. For her per- formance this past season, Frazier has been recognized as the 14th Region Player of the Year as selected by the Kentucky Volleyball Coaches Association.

The Lady Cougars competed in the state tournament in Louisville last weekend, but fell to Southwestern High School of Somerset. Frazier was honored prior to the championship game on Saturday night, receiving a plaque in recognition of her outstanding accomplishments in her senior season.