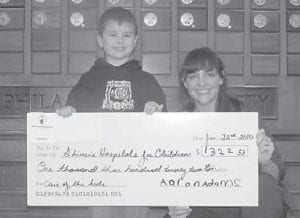 DONATION — Six-year-old Aaron Adams presents Jenna Taylor, associate director of development at Shriners Hospital in Lexington, with a check for $1,322.58.

On January 22, Aaron Adams of Sandy Hook presented Shriners Hospital in Lexington with $1322.58. Aaron and his family raised the money with a cupcake bake sale that Aaron wanted to do for the hospital. Prior to making his donation, Aaron and his family were given a tour of the facility in Lexington and Aaron was able to see for what his donation was going and whom it would be helping.

Community support was outstanding and Aaron surpassed his original goal of raising $100 and selling 200 cupcakes — he sold 1,730 cupcakes. Aaron and his family expressed thanks to everyone who purchased cupcakes, helped spread the word about his efforts, donated money, or bought supplies.

Aaron is a kindergarten student at Sandy Hook Elementary School. He is the six-year-old son of Bobby and Jenine Adams, and has a brother, Cameron Adams, 4. He is the grandson of Robert and Rose Adams of Haymond.