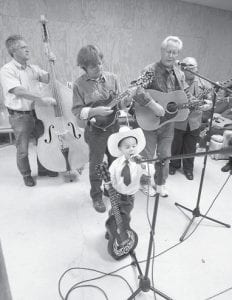 Bluegrass music fans around the Lexington area are starting to notice a new, but quite small, star lighting up the local scene.

Jonathan particularly likes to perform with his favorite group, Driving Rain, wearing a cowboy hat and jeans and playing the banjo, the mandolin or, as he puts it, “beatin’ the fire out” of a guitar.

What’s notable about all this is that Jonathan is 3 years old.

Admittedly, he isn’t quite ready for the big time. His playing has a way to go — he’s never had a lesson — and he hasn’t mastered all the words to many of the songs. But folks agree that he has a flair for performing.

“He’s very natural onstage,” says Driving Rain leader Jim Willoughby, who invites Jonathan to play along with the band every chance he gets. “And he puts a smile on your face because he just loves the music to death. I really think he could make a fine musician one of these days if he sticks with it.”

The area’s newest bluegrass boy began his musical love early. Jonathan’s mom, Terri Wilson, says that even when Jonathan was in the crib he’d perk up and listen whenever banjo music came on the radio or television.

“My dad was a talented musician, so maybe it’s in his genes,” Wilson said.

Soon, Jonathan was “playing along” with the radio, plunking away on a banjo he borrowed from his father, Nathan Rader. Last Christmas, his dad bought him a full-size banjo of his own. Now he also has a mandolin and a kid-size guitar.

That’s how Willoughby first noticed him. “We were playing at High Bridge, and I saw this little kid standing right out in front of us,” Willoughby said. “He was playing a guitar lefthanded and, unbelievably, he was keeping time with us perfectly.

Willoughby asked the boy if he’d like to help sing, and Jonathan said “yeah.”

“So, I would sing a verse and then hold the microphone down and he would sing the chorus. He’d miss a word now and then, but he would hang right in there. And he never missed a lick with his rhythm. That’s really unusual for a 3-year-old.”

Nathan Rader says Jonathan has become so comfortable with the band that he sometimes tells them to start a song, by saying, “Kick it off, boys, kick it off.” And, of course, they do.

Only time will tell whether Jonathan remains interested in music or becomes fascinated with something else as he gets older.

Nathan Rader, a big bluegrass fan himself, says he encourages his son’s musical interest, but isn’t pushing him. Still, he makes no bones about being excited by his son’s budding talent.

“If he told me tomorrow, ‘I don’t want to do this anymore,’ it probably would break my heart,” he said. “But that would be OK.”

“I think it would be great to sit on the porch someday and play with my son,” Nathan Rader said.

Terri Wilson says her son is enjoying the ride. “At this stage, he doesn’t really know what he’s playing, but he’s definitely interested,” she said. “My dad would be so proud of him.”