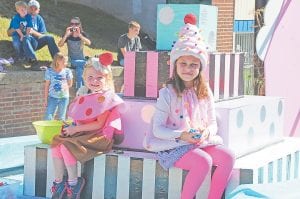 Kennedy Sexton and Cheyenne Bates took a break from tossing candy during Saturday’s Mountain Heritage Festival Parade. The two were on a float sponsored by Icing on the Cake, a new business that opened on Main Street in Whitesburg in September. (Photo by Chris Anderson)