Little was revealed about crash in 1966 that killed Letcher pilot

When the body of First Lieutenant James Nelson Spangler was brought back to Letcher County from Okinawa, Japan for burial in June 1966, little was known about the circumstances surrounding his death.

“Lt. Spangler died May 19 in the explosion of a jet tanker on Okinawa,” The Mountain Eagle reported on the front page of its June 9, 1966 edition. The story contained no other details about the cause of death.

Fifty years ago last week — on June 4 — Spangler was buried at Green Acres Cemetery at Ermine after his funeral service was held at the Thornton Regular Baptist Church at Mayking. It would later become known that Spangler, a 24-year-old Air Force Academy graduate, was one of 12 people — 11 airmen on the plane and one civilian on the ground — who were killed when the KC-135 Stratotanker he was co-piloting exploded after crashing on takeoff from Kadena Air Force Base.

Aside from obituary information contained in The Eagle and newspapers in other hometowns of the victims, very little was reported about the accident. United Press International (UPI) released the following dispatch — datelined Naha, Okinawa — on the day of the crash and explosion: 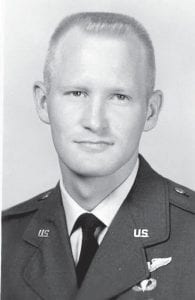 Lt. James N. Spangler was killed in a crash in Okinawa in May 1966.

Air Base, killing five crewmen and an Okinawan civilian who was struck by flying debris, the Air Force reported.

“The big tankers are used to fuel Guam-based B-52 bombers en route to and from bombing missions over Vietnam.

“First reports said 10 persons were aboard the KC-135, which usually carries a crew of five, but the Air Force said only five were aboard. 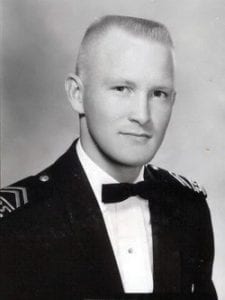 Lt. James N. Spangler is seen as a cadet at the Air Force Academy. Spangler was buried here 50 years ago.

“U.S. Civil Administrator Gerald Warner sent a condolence message to Okinawa chief executive Seiho Matsuoka expressing sympathy to the family of the dead Okinawan, Kazuo Shimizu, noting that ‘some of my countrymen’ died in the crash.”

The Department of the Air Force eventually confirmed that 11 people died in the explosion, and said the explosion occurred “during a routine training flight, with the aircraft crashing on takeoff.”

The Air Force stood by that story until October 1973, when General John C. Meyer, the commander-in-chief of the Strategic Air Command, said in a letter to General A.P. Clark, “we can state that Lieutenant Spangler was killed on a mission that was involved in direct support of our combat effort in Southeast Asia.”

Gen. Myers’ acknowledgement to Gen. Clark, then the superintendent Air Force Academy, represented an about-face from the Strategic Air Command’s June 1973 statement that said “the mission wherein Lt. Spangler became deceased is still classified and will remain so for the next 10 to 15 years.”

The letter from Gen. Myers was the result of a four-year effort by Gen. Clark and other Air Force Academy officials to have Lt. Spangler’s name added to the Academy’s War Memorial. Spangler’s name finally was added to the memorial just before the Academy’s “Homecoming ’73” event. The declaration from Gen. Myers was necessary in keeping with the Academy’s requirement that a graduating officer killed outside an area of conflict can have his name added to the War Memorial only if that officer died while “directly supporting the activities within that area of conflict.”

Lt. Spangler, a former Whitesburg High School student, qualified for inclusion because the crash and explosion occurred while he was on assignment to deliver parts — perhaps including an engine — needed to a fix another KC-135 fuel tanker that was needed to support a surprise bombing over North Vietnam. The mission was to generate from the Yokota Air Base, also in Japan.

Because the surprise bombing was set to take advantage of the monsoon season — “at a time it would be least expected,” says one account — it was raining heavily at the time the KC-135 took off. Eyewitnesses say the tanker, which was piloted by Captain Benny Thomas Stowers, 41, of Juno, Georgia, hydroplaned while taking off from the wet runway and crashed near an “ammunitions dump.”

In his 1997 publication “Stratotanker: More than Just a Tanker,” author Robert S. Hopkins III said the plane and its five crewmembers, including Spangler, were in Okinawa on temporary assignment from Turner Air Base, Georgia when the accident occurred. Also on board were six mechanics.

“When they were halfway down the runway on takeoff they got a radio call to cancel the flight, the Yokota tankers were fixed,” wrote Hopkins. “It was too late to abort the takeoff and it is believed they were hydroplaning. Once airborne, they are thought to have touched back down and got airborne again, then lost engines, possibly one, two, and three at once. They veered left, came down nose high, and crashed into a hill by the ammo depot, and a cement bridge nearby. Some of the debris impacted at Highway 16, killing a motorist. All 11 on board were killed.”

After graduating from the Air Force Academy in Colorado Springs in 1964 with a Bachelor of Science degree, Spangler earned his silver pilot wings after graduating from flight training school at Webb Air Force Base, Texas. He was then assigned for flying duty at Turner AFB, where he was a member of the Strategic Air Command. In a news release announcing his assignment, the Air Force described the SAC as “the free world’s mightiest missile and jet bomber force ready to counter the enemy threat.”

An eyewitness to the crash, Air Force Sgt. Rodney Luna, said “the monsoons had been hitting the island (of Okinawa) for over a month” when the crash occurred.

Sgt. Luna, an Air Force fireman who was one of the first rescuers to reach the crash scene, wrote about the incident in a memoriam for one of the crash victims, Airman 1st Class Thomas Richard Annis of Hesperia, Michigan.

Here is some of what Sgt. Luna wrote:

“Headquarters had decided to surprise the North Vietnamese with a bombing raid during the monsoon season. The rain would just not let up, but Yokota had a problem. Three of their KC-135s had generator problems and were down. So, they sent us a message asking for generator parts and six aircraft mechanics to install them. Taking off was the pilot’s decision. Three aircraft ahead of him aborted because of the murderous rain. He knew the parts were needed so he made the fatal decision to lift off.

“Halfway down the runway the word hit the tower from Yokota, ‘Cancel the flight.’ They had cannibalized one of their own KC-135s and got the other three up and flying. But it was too late for the pilot to abort. He had passed the halfway point and had no choice but to force full-throttle and pull back on the stick. Unfortunately, he was unaware that he was hydroplaning on the water on top of the runway and actually losing control and power. The engines must have been screaming, trying to lift off and overcome the heavy volume of water that was being sucked in through the intakes. Liftoff was at the very end of the runway. But just as he got off, three of the four engines flamed out. Only his No. 4 extreme starboard engine was trying to pull him up, causing him to veer left, right toward the ammo dump.

“The (tanker) was only airborne long enough to jump the perimeter fence. She came down on top of a Volkswagen, driven by a mechanic on the perimeter road. The right main gear crushed the car instantly. She was headed nose-up, belly first, for the small dirt hills that surrounded the ammo dump.”

In a 2002 epilogue to his original account, Sgt. Luna wrote about finding the names of Lt. Spangler and the other crash victims on The Virtual Wall, an online Vietnam War memorial that includes the names of every soldier whose name appears on the Vietnam War Memorial in Washington, D.C.

“I knew that only men killed in Vietnam were listed on the Wall, but I still looked as I had done so many times before,” Luna wrote. “This time I only entered the date May 19, 1966, and to my surprise 11 names all came back. It said that they were all killed in South Vietnam, but I knew it was Okinawa. All were airmen killed in a plane crash. I was dumfounded; I had found the entire crew of the ill-fated KC-135.”

Sgt. Luna was finally able to find the names of the 11 crash victims because theirs were among the names of 108 servicemen added to the Vietnam Memorial in March 1986. Ninety-five of the names belonged to men killed in combat-related air crashes that occurred outside the official combat zone of North and South Vietnam, Laos, Cambodia and the coastal waters of those countries.

Before graduating from the Air Force Academy with high honors, Lt. Spangler attended Whitesburg High School for two years followed by two years at the Berea Foundation School in Berea, Ky. He was nicknamed “Spinney,” he told Air Force officials, because “it is easier to say than Spangler.”

Spangler became very popular at the Air Force Academy, where his fellow cadets gave him the new nickname “Watash.”

“In 1960 this Kentucky mountain boy put on some shoes, left the still, and came west to find civilization,” some of the younger cadets joked in a loving tribute they wrote about Spangler at the time of his graduation. “He settled at a camp for boys in Colorado where he learned to read and write, play squash, ski, dance, and drive his new ’64 Lemans. He even stopped blushing long enough to appreciate the virtues of Colorado women. After four years at this camp, ‘Watash’ acquired sufficient sophistication to move on. He is now in Texas flying airplanes and soaking up southern culture. Be on the lookout for this blond ridge runner, ’cause shore ain’t backward no more!”

In an online memoriam to Lt. Spangler, his sister, Saranell Caudill of Whitesburg, writes that “his dream was to one day be an astronaut.”

“If he’d had the chance I believe he would have made it,” she added. “He was eight years old when I was born and left home while still in high school to attend the Berea Foundation, and then from there was accepted into the Air Force Academy. I can remember when he would come home to visit when I was just a girl and I always thought he was so grand. He would always tell me to straighten my shoulders and walk correctly.”

Lt. Spangler was also the brother of the late Robert Mitchell Spangler of Pine Creek, who died last month at age 63. Three other brothers — George Spangler Jr., Manuel Lee Spangler, and Ronald Spangler — live away from Letcher County, as does his sister Zona Claytor.