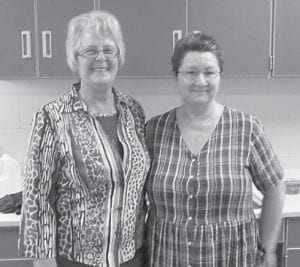 Wanda Lynn Williams-Webb of Linefork, the administrative secretary at the Letcher County Area Technology Center, is retiring after 23 years. She is the daughter of Ruth Frazier of Kingscreek, and the late Atlas Frazier, She has three children, Kevin Williams of Prestonsburg, Angela Sexton of Kingscreek, and Leslie Williams of Defeated Creek, and seven grandchildren, Alex, Megan, Mason, and Keaston Williams, Schyler and Tanner Sexton, and Madison Fugate. She plans to stay active after her retirement with woodworking and her grandchildren. Those with whom she works and the students whom she helped say they will miss her. Pictured are Wanda Williams-Webb and longtime coworker and best friend Kitty Back.

Sorry for no column last week, just a little too busy to write. As I write this morning we are having a cold, windy and snowy day.

So many lives were touched by sadness again this past week, and it will make for a lot of sad holidays.

Well-loved Rob Campbell died and left many family and friends brokenhearted. I don’t think I know everyone who didn’t love him as a neighbor and friend. He was a member of the Doermann Presbyterian Church, where his final service was held last Thursday.

Rob was a World War II veteran and served as a Navy Seal. Our sympathy to Betty, the children, grandchildren and greatgrandchildren.

Also, Steven Hampton died unexpectedly from a heart attack last Saturday. He was a son of Relon and Adeline, and was only 41 years old.mHe leaves his wife, Lisa, son Mark and daughter Stephanie, brothers Bernard and David, and sister Wendy, and many others to mourn his passing.

He was a member of the Dixon Memorial Church and was laid to rest in the Hampton Cemetery at Jeremiah.

His family and friends are sad to see him go, but he is at rest now from all the worries of this life. He dedicated his life to preaching the glories of God and was always a humble and kind man, always speaking good of others and never standing in judgment of them.

The Blair Branch Church has lost a mighty leader who was always there to work hard physically and spiritually on the old church building. He will be missed so much, not only by his family, but the Blair Branch and surrounding communities as well His funeral was held Saturday at the church, and visitation was there on Friday evening as well.

Our hearts go out to Jerry, Scott, Tammy and Ila during this sad time, and to the rest of Ellis’s loved one and family. His sisters, Pressie and Lucille, are the last of this once-large family, and Ellis’s nephews and nieces all loved him so.

The dreaded virus has hit so many of the children in this area, and also the flu has been doing around. Maybe while school is out of Christmas the germs will die down

A large crowd of parents and grandparents and others attended last week’s Christmas program at Letcher Elementary School. The kids did well with their Christmas singing and music.

Van Blair and Cathy Blair are both still having health problems, and we pray they can feel better.

Sorry I don’t know much other than sadness to write about this week.

I hope that despite that, all have a merry Christmas thinking about the birth of Christ and the love of God, family and friends.

I probably won’t have another column until after New Year’s, so happy New Year in advance.

Don’t forget about the singing the old year out and New Year in at the Mount Olivet Church at Blackey on New Year’s Eve.

Adams Branch resident, Betty Sue Back, also recently passed away on Dec. 14. She was a sweet, quiet lady and always a friend of Bob’s mother, Opal Banks.

She was the widow of Stan Back, and their children were Jennifer, Roger, Sandra, Rod and Randy.

All have our sympathy during this sad time, as do their families and Betty Sue’s brother and sisters.

She will be missed not only by her natural family, but her church family, neighbors and friends.