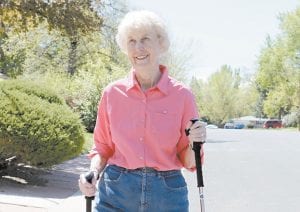 Elaine Vlieger, 79, walked recently near her home near Denver, Colo. Vlieger is making some concessions to her early stage Alzheimer’s, but isn’t ready to give up either her home or her independence. She stays active with yard work and daily walks. (AP Photo)

Elaine Vlieger is making some concessions to Alzheimer’s. She’s cut back on her driving, frozen dinners replace once elaborate cooking, and a son monitors her finances. But the Colorado woman lives alone and isn’t ready to give up her house or her independence.

Some 800,000 people with Alzheimer’s, roughly 1 in 7 Americans with the disease, live alone in their communities, according to surprising new data from the Alzheimer’s Association. It’s a different picture of the mind-destroying disease than the constant caregiving that eventually these people will need.

Many such as Vlieger cope on their own during dementia’s earlier stages with support from family and friends who keep in close contact.

But support or not, living alone with a disease that gradually strips people of the ability to know when they need help brings special safety concerns, and loved ones on the sideline agonize over when to step in.

“We don’t want to have to force it before it’s time. But how do we know?” asks Marla Vlieger of Denver, Elaine Vlieger’s daughterin law.

There’s no easy answer to that, and it’s a challenge that only will grow as Alzheimer’s surges in the coming years. Already, an estimated 5.4 million people in the United States have Alzheimer’s or similar dementias. That number is expected to reach up to 16 million by 2050 because the population is aging so rapidly.

Census figures show that nearly one-third of all people 65 and older live alone, and by their 80s more than half of women do. Most older people say they want to stay in their homes as long as possible, and developing cognitive impairment doesn’t automatically mean they can’t, says Beth Kallmyer, a social worker who heads constituent services for the Alzheimer’s Association.

The association’s new analysis illustrates the balancing act between a patient’s autonomy and safety. People with dementia who live alone tend to be less impaired than those who live with caregivers. But they are impaired, and studies show they have a greater risk of injuries, even accidental death, than patients who don’t live alone.

There’s no one to check that the stove wasn’t left on or to notice right away if the person gets lost or has a fall.

Marla Vlieger, who lives nearby and is her motherin law’s primary caregiver, worries about those possibilities. She attends Alzheimer’s support groups to learn from other families’ experiences. But unlike her mother-in-law, the patients she’s met have a spouse who can spot problems in a way that even regular visitors such as the younger Vlieger and her husband cannot.

Moreover, surveys suggest that as many as half of those with dementia who live alone can’t identify anyone as their caregiver, someone who at least checks in periodically to see how they’re faring, the association reported. Too often, those are the people whose dementia is discovered in an emergency, such as when neighbors call police to check on a senior whom no one has seen in days, Kallmyer says.

Specialists struggle with how to advise patients who show up with no one to help, like the 68-year-old man who drove himself to Maine Medical Center for a memory evaluation and said he’s not close to his only relative.

“ He couldn’t draw a clock. He couldn’t complete a check correctly. And he couldn’t make change for a $5 bill,” geriatric physician Dr. Laurel Coleman, who diagnosed the man, told a recent meeting of the government’s Alzheimer’s advisers.

Plan, due to be finalized this month, could help. It aims to increase screening of older adults to catch dementia earlier. It also urges doctors to help patients plan ahead for their future care needs while they still can. Kallmyer say that’s absolutely critical for those who live alone.

Elaine Vlieger had been her late husband’s caregiver during a long illness and knew the importance of that planning. After her Alzheimer’s diagnosis 18 months ago, she designated power of attorney and who will help make her health care decisions, and added a son to her bank accounts.

For day-to-day living, Vlieger makes reminder lists. A friend accompanies the once avid hiker on a daily neighborhood walk, and neighbors check on her. She’s considering wearing a monitor to call for help if she falls.

Transportation is a key part of planning care for people with Alzheimer’s. Vlieger insists her driving is fine, and sticks to small, familiar roads and avoids rush hour as a precaution. Daughter-in-law Marla, however, says the doctor wants her to quit.

The younger Vlieger says her mother-in-law generally copes well but is finding it harder to handle the unexpected. Family members get tearful phone calls over small crises such as a toilet overflowing. Email has become frustratingly hard because the provider updated the program so it no longer looks familiar.

Then there’s the planning about housing.

One son is researching assisted living options, but Vlieger protests, “I’m more active than those people are. It makes me feel old when I go in there.”

She likes her daughter’s suggestion of in-home services that could be added over time. Daughter-in-law Marla wonders if a geriatric care manager could offer professional advice “to help us decide what we need, and when we need it.”

The trickiest part , Kallmyer says, is when to overrule someone with Alzheimer’s and start making decisions for them.