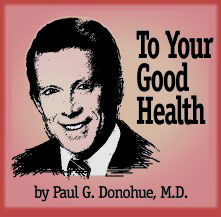 DEAR DR. DONOHUE: In the past you wrote: “There are many things that can make life with emphysema more livable.” However, you didn’t mention what those things are. I would sure like to know them. – A.B.

ANSWER: Emphysema is the destruction of air sacs, the delicate lung structures through which oxygen passes into the blood. With emphysema, oxygen cannot get into the blood. Its principal symptom, therefore, is breathlessness even on minor physical activity. Emphysema’s twin is chronic bronchitis, an irritation of the bronchi (the airways). Its identifying symptom is persistent cough with thick yellow sputum. Most people have both conditions simultaneously, and they are referred to as COPD, chronic obstructive pulmonary diseases. The treatments I discuss apply to both.

Drugs that soothe and open irritated airways filled with mucus improve breathing and lessen coughing. Most are taken as mists generated by a mouth inhaler. Albuterol, terbutaline, tiotropium and ipratropium are a few examples.

A prednisone inhaler is used when there’s a flare-up of symptoms. Prednisone is a cortisone drug, and it’s a powerful inflammation fighter and irritation soother.

Oxygen is, of course, an important adjunct in treating COPD.

Exercise is essential for all COPD patients. That sounds like a mindless piece of advice for people who have a hard time getting enough air. But it has to be done, if possible. Muscles quickly become deconditioned when they aren’t exercised, and deconditioned muscles add to the burden of not being able to breathe easily. Even if people start out by taking only 20 extra steps a day, they can build on that gradually until they are walking for 10 or more minutes at a time.

COPD patients can help themselves by adopting a different breathing technique. They should inhale slowly for about four seconds and exhale even more slowly, taking six seconds and doing so with lips pursed as though they were going to whistle. By leaning slightly forward when they breathe, they permit the lungs to expand more and to hold more air. Many hospitals sponsor pulmonary rehabilitation programs.

DEAR DR. DONOHUE: I’m my own boss. I live not far from my office, and I go home for lunch. I take a short nap after eating. It really refreshes me. My wife thinks I might be throwing my body clock out of sync by taking the nap. Am I? I sleep well at night. – G.K.

ANSWER: A nap of less than 30 minutes invigorates many people and increases their afternoon performance. One less than 10 minutes doesn’t do much good.

After a nap, many people experience a light lull in mental functions for about half an hour, but they make no more errors in that time than they would have if they hadn’t taken a nap. From then on, their performance improves. Napping doesn’t throw off your biological clock.