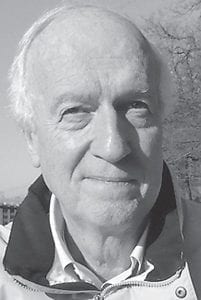 Why does America have a constitutional right to keep and bear arms? Exactly what does that mean? Can we reconcile the individual right to own and use guns with the right of Americans to live in safety from gun violence? Are 30,000 deaths by gunfire every year the necessary price of the Second Amendment? Is keeping guns out of the hands of as many Americans as possible really the best way to keep them from criminals? Can gun-rights and gun-control advocates find common ground?

Few people have delved as much into these questions, and come up with as many answers, as Craig R. Whitney, author of Living with Guns: A Liberal’s Case for the Second Amendment, recently published by Public Affairs Books. As a former foreign correspondent and assistant managing editor for standards and ethics at The New York Times, and a Navy veteran of Vietnam who was born in a small town, Whitney brings a broad perspective to one of the most divisive issues in America today.

He believes those on the left must accept that a gun-free America is not possible and that they should not demonize those who want to exercise their constitutional right to carry guns; and those on the right must recognize that not every gun-control measure is an effort to repeal the Second Amendment and that gun ownership must be exercised with an eye to public safety.

Whitney will discuss his ideas and his book, and discuss them with the public, in a free lecture at 7 p.m. next Thursday (March 28) at the University of Kentucky in Lexington.

Following is a conversation with Whitney about Living With Guns:

This is the first book you published after retiring from a 45-year career at the New York Times — why write a book about the Second Amendment?

‘Why do Americans have such a love affair with guns?’ I would be asked over the years by puzzled British, French, German, and even Russian friends when I was a foreign correspondent. Then I’d read about mass shootings like Columbine and wonder myself why nothing seemed to change after any of them. When I had the time, I thought, I’d look into the history of guns in America, find out how we came to have the right to keep and bear arms in our Bill of Rights — the Second Amendment — and see how it has been understood since it was adopted at the end of the 18th century. I hope the book will encourage people to think about our gun violence problem in new ways, and maybe to find better ways of dealing with it.

Do you own guns yourself?

I don’t own any guns, but if I’d grown up on a farm in the small Massachusetts town I came from, I probably would. I carried a .45 during the year I served in the Navy in Saigon during the Vietnam War.

Why do you think the Second Amendment guarantees an individual right to bear arms?

The Second Amendment didn’t create a new Constitutional right; it recognized and protected a common-law individual right that had existed in the colonies since Jamestown. Able-bodied free white males had the right to own firearms for self-defense and hunting, and the duty to serve in militias for civil defense when called on. Clearly, gun owners did not have to be in the militia before they could own a gun in those days, and they don’t today, either. Does that mean there is no civic duty connected with gun ownership today? I don’t think so – I think there’s a responsibility to use arms safely in accordance with the law.

How did early American settlers think about guns? What about at the time of the writing of the Declaration of Independence?

The first settlers needed guns to hunt game but also, from the start, to defend themselves against attacks by native Americans, who understandably came to view them as enemy intruders after it became clear that they had come to stay on land the natives thought was theirs. Later, American and British militias fought off French and Spanish attackers who used Indians as pawns in their own attempts to keep the British from controlling the North American continent.

By 1774, the commander of all British forces in North America found “the whole country in a ferment, many parts of it, I may say, actually in Arms, and ready to unite.” The battle of Lexington in 1775 proved him right, and that July, a year before the Declaration of Independence, the Second Continental Congress declared, in words Thomas Jefferson co-wrote, that Divine Providence itself had seen to it that Americans were “exercised in warlike operation, and possessed of the means of defending ourselves.”

How has gun regulation evolved over the years?

Guns have always been regulated in America, but regulation has taken many different forms. In Massachusetts in 1632 during hostilities with the Pequot Indians, single men were required to furnish themselves with firearms, and to bring them to church services; people were forbidden to go more than a mile from home without a gun. Puritan authorities seized guns belonging to people they considered heretics. Firing a gun or a pistol within city limits was a crime in Boston in the 18th century; Boston, New York, and Philadelphia all had regulations about keeping or storing guns and gunpowder in homes. Roman Catholics in New England, and slaves everywhere, were mostly forbidden to have guns. There was gun registration: authorities in towns and cities with militias knew who had guns, and potential militiamen who didn’t were often made to pay for ones supplied by their town.

Concealed carrying was banned in many states, including Oklahoma and Montana in the 19th century (it was thought cowardly), and guns could not be openly carried in Tombstone – the shootout at the OK Corral there in 1881 started after Ike Clanton was fined for violating the prohibition. In Dodge City, Kansas, cowboys had to check their weapons at the edge of town.

Federal gun control began with the National Firearms Act of 1934, passed after a wave of violence during Prohibition — to keep sawed-off shotguns, silencers, and Tommyguns out of the hands of the Syndicate (think Eliot Ness). Later, the assassinations in the 1960s of President Kennedy, Martin Luther King, and finally of Senator Robert F. Kennedy led to the Gun Control Act of 1968, mandating the federal licensing of individuals and companies selling firearms and making it illegal to sell guns or ammunition to convicted criminals, fugitives, users of illegal drugs, the mentally disturbed, illegal aliens, people subject to restraining orders, or people discharged less than honorably from the armed forces. Some provisions of the Act were later watered down, and it took Ronald Reagan 10 years after he and his press secretary, James Brady, were shot by John W. Hinckley in 1981 to come around to support for handgun control measures. They became law in 1994 when the Brady Handgun Violence Prevention Act went into effect, and four years later the National Instant Check System, the NICS, was created to vet prospective gun buyers – but only those buying from federally licensed firearms dealers. That leaves 40 percent of sales uncovered.

When did self-defense come to be understood as the main purpose of the 2nd Amendment?

In the early 19th century, white southerners began carrying weapons to protect themselves against slaves in case of uprisings. As the Civil War approached, abolitionists trying to keep Kansas from becoming a slave state were supplied with rifles to defend themselves against their opponents. During and after Reconstruction, the federal government tried to arm African-American freemen for self-defense against Southern irredentists and the Ku Klux Klan. But it was not until the 1960s that self-defense with firearms became a national obsession, because of that decade’s racial and social upheavals, coupled with urban violence and rising murder rates – murders mostly committed with firearms, and the police in many places seemingly unable to stem the violence.

Where do you think the NRA and other gun rights supporters have gone wrong?

In recent times, violent crime has fallen dramatically almost everywhere – with exceptions in places like Chicago and parts of New York – but the NRA continues to encourage hysteria about crime and the need for firearms to use in self-defense against violence. The NRA’s view of the Second Amendment as above all a guarantee of the right to self-defense in the home, and fears about personal safety in the streets have made healthy and rational debate about gun laws and public safety just about impossible.

What about gun-control advocates?

The NRA is right when it says guns don’t kill people – people do. Preventing as many law-abiding people as possible from exercising their rights to have and use firearms does not keep criminals or misguided youths from committing crimes with illegal guns. Just look at New York City – I almost certainly can’t get a license to have a gun even in my own apartment, but how does keeping people like me from owning guns prevent gun violence?

What is your opinion on stand-your-ground and castle doctrine laws?

Legislators should be ashamed of passing laws that make it easier to kill people. Owning guns does not and should not make gun owners a law unto themselves.

Are there any measures that everyone agrees upon that we could enact to control gun violence?

People who commit crimes with guns, acquire guns illegally, or help people not entitled to own firearms (convicted criminals, drug addicts, those adjudged mentally unstable, etc.) to short-circuit the instant background check system should be prosecuted to the full extent of the law.

What other policy changes and actions do you suggest?

Ignore the NRA and make the background check system apply to all firearms sales, not just sales by federally licensed dealers. Also ignore the NRA’s misleading propaganda labeling the loophole the “gun show loophole.” Most private sales do not take place at gun shows.

But, crucially, remember that guns aren’t the problem; aberrant human behavior is. Programs like CeaseFire, in Chicago, that enlist former members of street gangs to convince youths in troubled neighborhoods that guns are not the answer to their problems, and more attention all cities to the educational and social needs of children in troubled neighborhoods, will do far more to reduce gun violence than stop-andfrisk ever can.

The event is sponsored by UK’s College of Communication and Information, its Institute for Rural Journalism and Community Issues and the Bluegrass Professional Chapter of the Society of Professional Journalists.

“We’re proud to bring in a journalist of Craig Whitney’s stature to discuss such an important issue with people from the campus community, Lexington and elsewhere in Kentucky,” said Al Cross, director of the rural-journalism institute, part of UK’s School of Journalism and Telecommunications.

“This is an opportunity to attract supporters from opposite sides of an important, but contentious issue,” said Dan O’Hair, dean of the College of Communication and Information. “Open and constructive dialogue about any of our Bill of Rights is what college campuses should be promoting.”