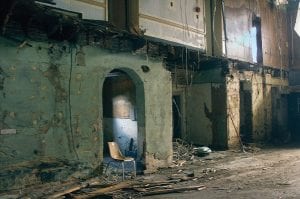 ARTFUL DESIGN – An empty, 1980s era plastic chair sits in front of an arched doorway built-in 1919 in the basement of the Daniel Boone Hotel in Whitesburg. The hotel opened Independence Day weekend 1920, and served as a hotel, medical clinic and temporary courthouse until 1999. It has sat vacant ever since, but is now being remodeled with the help of grant money obtained by the City of Whitesburg. Workers are now cleaning up debris from a collapse that took out a third of the roof and all three floors. (Photo by Sam Adams)

Tax revenue lost by the closing of one of the only two motels in Letcher County appears to have been largely offset by the growth in tourism and Airbnb rentals.

According to figures provided by the county, motel tax receipts for the fiscal year that ended June 30 were down less than $800 from the previous year, despite the closing of the Whitesburg Motel last fall. That means a difference of $26,666 spent on lodging.

“It surprised me that there’s that many Airbnb’s in Letcher County,” Judge/Executive Terry Adams said.

Since the late 1980s, Letcher County has levied a 3 percent transient room tax on overnight lodging with the money going to promote tourism in the county. For the first few years, it was often ignored, but the record has improved since the early 2000s with enforcement by county attorneys. The tax collection rate is much better now, and serves as an indicator of the number of travelers who stay overnight each month and year. 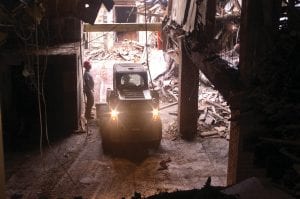 CLEANUP DUTY – A skid-steer loader removes debris from the basement of the old Daniel Boone Hotel building recently. The cleanup is due to be completed within the next few weeks, and construction of new floors and a roof will begin. (Photo by Sam Adams)

(Local Airbnb rentals go through the lodging reservation website from Airbnb Inc. in San Francisco, California (www.airbnb.com) that lets property owners list their spare room, apartment or home in thousands of cities worldwide. Payment is made to Airbnb, which forwards the funds to the host after the guest arrives and everything is as advertised.)

The tourism revenue could grow again when renovations of the Daniel Boone Hotel in downtown Whitesburg, or with an increase in occupancy at the Airbnbs. The century-old hotel is currently undergoing demolition and stabilization after about a third of the roof collapsed, taking the three floors underneath with it.

Though the current project will stop once the floors are rebuilt and a roof is put on, the second phase is supposed to bring it to the point that a hotel operator could add fixtures, finishes and furniture and reopen it with about 42 rooms.

“When the Daniel Boone gets up and going, there will be some tourism money coming into the city and helping everybody out,” Mayor James W. Craft said.

Adams credited the county Tourism and Convention Commission with softening the blow of the Whitesburg Motel closure. The commission advertises the BnBs in one place on its website (www.discoverletcher.com), giving them more exposure, and giving the county a way to keep up with the taxes owed.

The county has put an emphasis on the tourism economy since January of 2018, when overlooks were built on Pine Mountain and the tourism commission began offering guided hikes and driving tours. Anecdotal evidence says tourism is getting bigger here, but Adams said he thinks it is probably “about steady.”

State reports show the number dropping from 2017-2018, but the methodology used to produce the report changed from the previous year, which showed the amount spent by tourists in Letcher County increased by 10 percent from 2016-2017. The new report, issued in May 2019, shows tourists spent $15.52 million in Letcher County in calendar year 2018, and $15.62 million in 2017.