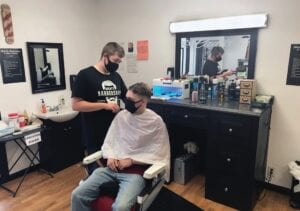 HAPPY DAYS ARE HERE AGAIN … SORT OF — Whitesburg barber Brent Vance was happy to reopen his barbershop on Main Street in Whitesburg on Monday, but noted that new social distancing rules were creating longer work hours. Vance worked until 10 p.m. on Memorial Day and was expecting to close about the same time. In the photograph above, Vance was cutting the hair of Eolia resident Jonathon Niece on Tuesday afternoon while other customers awaited their turns while standing outside. Vance generally works alone in the shop but is being assisted this week by his grandmother, who is screening customers in the lobby in addition to taking reservations for haircuts on the telephone. (Eagle Photo)

Most businesses and some government offices are open again, but under strict new rules for social distancing, after nearly two months of closure due to COVID-19.

The slow rollout of openings began about two weeks ago, and so far Kentucky has not yet seen a large spike in cases of the disease.

Restaurants reopened at 33 percent capacity or with outdoor seating on May 22. Some managers and owners said it has been a big relief.

“Today, we just reopened and it’s been really nice, to be honest,” said Dakota Krahenbuel, manager of Dawahare’s 109, a pizza and sub shop on Main Street in Whitesburg.

Restaurants have to stay to 33 percent of their capacity prior to the virus, but Krahenbuel said that’s all right for Dawahare’s 109. The restaurant is still doing carryout, curbside and delivery, and the closure didn’t hurt as badly as he thought it would, though the business did have to cut the number of employees.

“Some days we kept up just fine, but other days we were a little worried,” he said. “Not saying we’re out of the dark yet.”

Next door, Heritage Kitchen owner Brad Shepherd said he had only one table of customers for dinein Tuesday, but it was a little busier over the weekend.

“We had three or four tables on Friday, eight on Saturday, one so far today,” he said.

But his restaurant is also continuing delivery and curbside for people who still don’t want to be in a public space yet. He said that part of the business has been up and down, especially since taking food to the edge of its delivery area can cause other orders to back up.

“We almost had too much at one time,” he said.

Pine Mountain Grill opened up its banquet room to regular customers to make room for booths and table moved out of its regular dining room. Booths that were back to back had to be roped off. It has delivery for people still nervous about coming inside, and there is still a lot of carryout, marketing director Whitney Hogg said.

“Of course, our staff is glad to be back, and we’re glad we can put 65 people back to work in our community,” Hogg said. “We’ve brought back almost everybody.

We’re pretty close to what we were at this time of year, but a little later in the summer, we usually hire a few more.”

At the courthouse, large signs direct people which way to go to pay bills and conduct their business. At times, people have been lined up around the front of the building, so to avoid having people squeeze past each other in the doors, they are being asked to enter through the front and leave through the side doors.

Other things reopening June 1 are bowling alleys, movie theaters and fitness centers, followed on June 11 by public and private campgrounds. Childcare and “low-touch” indoor and outdoor youth sports are scheduled to reopen with a reduced capacity June 15. Bars will be the last businesses to reopen, scheduled for July 1. Gatherings of up to 50 people will also be allowed then.