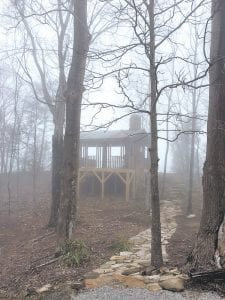 This new overlook atop Pine Mountain near Whitesburg was shrouded in fog when this photo was taken Tuesday afternoon. The overlook is one way the Letcher County Tourism Commission, under the direction of new chairwoman Missy Childers, has been working to change the county’s tourism economy. (Photo by Lee Michael Caudill)

Of the eight counties that make up the eastern border of Kentucky, only one has a smaller tourism economy than Letcher County.

When the counties immediately surrounding Letcher are taken into account, the county does a little better. Of those, Letcher had higher tourism expenditure than Knott or Leslie, but lower than Pike, Perry and Harlan. Wise County, Va., figures were not available.

Letcher County’s new Convention and Tourism Commission, under chairwoman Missy Matthews, has been working to change that. There are now overlooks on U.S. 119 across Pine Mountain, and the county is offering guided tours every weekend.

But the county has a volunteer commission, and only one part-time employee.

As part of a survey The Mountain Eagle sent to 32 candidates for county judge/executive and magistrate, we asked candidates how they feel about hiring a full-time tourism director for the county, what that person’s qualifications should be, where the money for the salary would come from, how they feel about spending money to develop the tourism industry here, and how they would pay for that.

Of those, eight said the county should not hire a full-time director, three said it should and one didn’t answer the questions. Only two of the three in favor gave an unqualified yes. The other one said yes, but not now.

The candidates’ complete answers are below.

QUESTION: Should the county hire a full-time tourism director?

Terry Adams — (This candidate marked out this set of questions and did not provide an answer.)

Mica Smith Johnson — Yes, when the county has a balanced budget and laid off county workers are back to work. Tourism is needed in our county. That (qualifications and pay) needs to be decided by the fiscal court. Once the budget is balanced this option (how to pay) can be explored.

Jack Banks — No. We now have a volunteer director at this time and she is doing a fantastic job! We should attempt to hire one in the future. (A director should) Have a good knowledge of the area and its unique history, and what we have to offer to people outside our area and state. A restaurant tax would be one way (to pay for a director).

Curt King — No. This position should be combined with the economic development coordinator. I believe tourism is important to move the county forward, however research shows that this is more than a $60,000 a year position and I’m worried we can’t afford both. Possibly in the future we can look into hiring another person if the budget and economic growth allows for it.

Sherry Sexton — Yes. Tourism could become a big business for Letcher County. Having a tourism director is essential to ensure that we are doing all we can to attract tourists, get infrastructure in place to house and entertain tourists. (A director should have a) Bachelor’s degree in tourism or public relations and at least two years of experience. Salary, $35,000.

Codell Gibson — No. County judge and magistrate(s) are already paid.

Emory “Fudge” Mullins — No. (We) Don’t need a full-time director. All should want to help.

Roger Back — Yes. We need someone who can focus full time to bring and improve tourism in the area. They should have knowledge of the area and reside in the county. They should be paid a comparable salary to other regional areas.

Melody Coots — No, the current tourism committee is establishing tourism in Letcher County and all the work it takes to get this feat accomplished but the development is seasonal and in its infancy and as for the income from this through the county would not support a full-time position. As tourism develops for our county this issue should be revisited at a later date.

Robert “Sarge” Howard — No. For the same reason as question 1. We can’t generate more expense on an already overstressed budget. Our local citizen groups have begun a good effort to boost our tourism and we need to get behind those efforts as county residents. As tourism grows and generates revenue then we could revisit the idea.

Johnathan Belcher — No. The tourism board should draw talent from local businesses to direct its efforts towards both proven and innovative measures. The limited county funds should be focused elsewhere.

Question: Should the fiscal court spend money to develop tourism in the county?

Terry Adams — We (the fiscal court) should help fund tourism projects in our county. We should reinvest tourism dollars that are generated back into tourism efforts.

By re-establishing our recycling program. We are currently paying nearly $50,000 per month to have our trash hauled out of the county. A lot of this can be recycled, thus lowering our cost and we would receive recycling revenue.

Mica Smith Johnston — Yes. When the budget is balanced and laid off county workers are back to work.

When we have a balanced budget this option can be explored.

Jack Banks — Yes. We have a unique variety of heritage, as well (as) beautiful trails, mountains with views and other attractions in Letcher County which we need to promote statewide and out of state.

When funds become available we should help. (Use) Tourism taxes?

Curt King — Yes. I believe the fiscal court should spend money to develop tourism in the area as it pertains to the economic plan developed by the economic development coordinator.

I believe there are several ways to fund these initiatives ranging from revenue collected by the county to grants, but I believe this would vary based on the amount of money needed for the project. I believe we have to be strategic about what kinds of projects we invest in rather than just chasing grant money, so I believe the answer to this will change passed on the results of a long-term economic plan.

Don McCall — Yes. We must promote tourism. It is essential for our future.

We must rely on our citizens and business through volunteers and donations.

Sherry Sexton — Yes, we need to develop tourism. We have so much natural beauty and so many talented people. These things need to be promoted and developed to bring more money into our county.

Codell Gibson — Yes. It brings people our county. It also brings money. It could create jobs.

If, and I say if, maybe work it in budget.

Emory Fudge Mullins — Yes. Spend some money because tourism does bring money to the county.

(Candidate did not answer this question.) District 4: Roger Back — Yes. We have very little funds to spend, however the county should spend all it can and seek additional grants and funds to assist our tourism.

We should cut all unnecessary spending first, then seek additional revenue.

Melody Coots — No, not at this time. The county needs to focus on economic development, so at a later date the county may be able to help support tourism.

Robert “Sarge” Howard — Yes. We need to consider tourism as our next best revenue producer in this county, and therefore must be willing to provide some dollars to move these efforts forward.

We should consider selling the rec center to private parties and allow them to take over the mortgage and the high cost of operation, and turn around and put that money back into the county economy and steer it toward tourism growth efforts.

Johnathan Belcher — Yes. Tourism dollars are a quick stopgap for our area. Developing existing tourism locations should get reasonable priority. Roadways leading to and from? On-site utilities?

A small one-to-three percent tax on restaurants would go a long way if appropriated for development and support of local tourism.