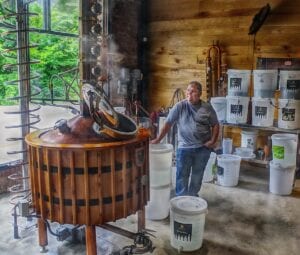 COOKING ‘SHINE — Colin Fultz, owner of Kentucky Mist Moonshine, watches steam roll out of the copper still at the distillery on Madison Avenue in Whitesburg. Distillers had just completed a run, producing a bitter, unfinished alcohol called “tails,” that will be distilled again with other ingredients to make a finished liquor. (Photo by Sam Adams)

Six years after opening its doors, Kentucky Mist Distillery has doubled its capacity and carried home a number of gold and silver medals in national competitions.

Now, owner Colin Fultz says he can double capacity again by moving part of his operation to the basement of the 96-year-old car dealership building the distillery rents from the City of Whitesburg.

Bottling its first run in 2015, Kentucky Mist has been a success, positioning itself as a craft distillery and making small runs of high-quality moonshine, vodka and whiskey. The SIP Awards, an annual competition that uses consumers to judge spirits rather than industry insiders, has recognized Kentucky Mist again this year with gold and silver medals, some of which put the distillery’s products in a class all their own.

The company is also getting recognition outside of contests. Backroads of Eastern Kentucky makes the distillery a regular stop on its auto tours, with exotic European supercars showing up a week ago to tour the facility. He closed a store in Lexington, but opened another in Myrtle Beach, making two locations in the South Carolina beach town. He also opened another store in Ocean Beach, Alabama, and just got a distributor to sell his products across about half of Texas.

But while he draws tourists and out-of-towners, there’s not much traffic from people who live here.

“People will come from everywhere to come in the place, but it’s hard to get locals to come in,” he said.

Nevertheless, the business is growing. Kentucky Mist employees five people in Whitesburg and about 15 people overall, but all of the liquor is made in Whitesburg. Fultz recently upsized the copper column on top of the still, doubling the capacity.

“We were producing 21 gallons and it was taking us 11 hours,” Fultz said. By increasing the column from 4 inches in diameter to six, he cut the time to 5 hours, allowing two runs of whiskey a day. A change from Mason jars to glass jugs and the installation of a small bottling machine cut the time further, allowing the company to produce 42 gallons of 130 proof whiskey per day. That is infused with fruit, producing about 55 gallons total.

“That’s a lot,” Fultz said. Considering that most of the products are sold in 175 millimeter bottles or quart jugs, that means the distillery can produce well over 200 bottles a day, and Fultz is still trying to increase production further. A “chop and whirl,” a machine similar to a giant food processor, was added to squash cranberries to cut infusion time from six weeks to one, and he’s looking at moving mash vats, where corn and sugarcane are fermented before going into the still, into the basement of the building to free up space for production upstairs.

Fultz said he might eventually open a second building somewhere to help with production, but the old KYVA Motors building, with its exposed brick walls, locally sawn wood shelves and bar, and the plate glass window framing the copper still will remain as the distillery’s main public location.

In fact, though the building is still a rental, Fultz has contracted with local artist Lacy Hale to restore the old R.C. Cola ghost sign on the east end of the building, and add a new Kentucky Mist Logo beside it. The west end will get the name of the distillery in large letters so tourists – and locals – will have an easier time finding it.