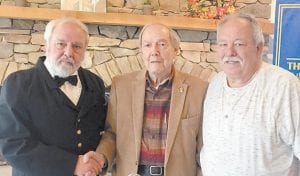 Rotarian Jack Burkich introduced Mr. Chaltas as a motivational speaker, author of more than 50 books, and the winner of the 2001 Teacher of the Year Award from the Kentucky Council of Children with Behavioral Disorders. His Alternative Education and Day Treatment Center was named Program of the Year by the International Association of Directors of Pupil Personnel.

Mr. Chaltas is a resident of Jeremiah and travels extensively portraying Confederate General Robert E. Lee. He shared with Rotarians stories of individuals who willingly volunteered to serve this country and paid the ultimate sacrifice so that we can enjoy the freedoms we have today.

He told the story of Dan Bullock, a 14-year old boy who altered the date of his birth certificate to enlist in the U.S. Marine Corps in 1968. Bullock made it through boot camp and was assigned as a rifleman at An Hoa Combat Base. He was killed during a night attack while making an ammunition run. He was just 15 years old, the youngest to die in the Vietnam War.

He also shared the story of Sgt. William Carney, who, after being shot several times, carried the U.S. flag in the midst of battle and never let it touch the ground.

Mr. Chaltas asked that when we see veterans, we take the opportunity to express our thanks and gratitude for their service to our country.