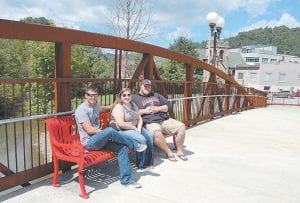 LOCAL TALENT GETS NOD — Kori Breeding (left), Shelley Long and Cory Harris will headline the Mountain Heritage Festival finale on Saturday night. They will take the stage at 8:30 p.m. (Photo by Sally Barto)

When Dry Fork resident Cory Harris asked around to see who would be headlining the music portion of the Mountain Heritage Festival, it didn’t cross his mind that he and two other finalists of the “Country Music Highway Road to Fame” competition would be sharing the stage at the festival’s finale this Saturday night.

Harris, 27; Kori Breeding, 26, of Isom, and Shelley Young, 27, of Craft’s Colly, are believed to be the first Letcher County residents chosen as Mountain Heritage Festival headliners.

“It is awesome to be showcased at Mountain Heritage,” said Young, who works at Hillbillies BBQ in Whitesburg.

Lee Anna Mullins, chairperson of the Mountain Heritage Festival, said the festival committee decided to focus on local talent for this year’s main act instead of bringing in professional entertainers from elsewhere.

“We’re proud of the fact that these three young people were in the finals of the Country Music Highway Road to Fame,” said Mullins. “I’m looking forward to seeing them perform together.”

Mullins thinks at least one of the three will end up living in Nashville, Tenn., pursuing a music career.

“ We look forward to them moving on,” said Mullins. “They are all three very talented.”

Breeding, Harris and Young have become a familiar sight at festivals and other gatherings in Letcher County over the last few years.

Breeding and Harris, both students at Southeast Kentucky Community and Technical College, credit Summit City in Whitesburg for helping them learn how to play music in front of an audience.

“That is where I cut my teeth,” said Breeding.

Harris said he often tells Summit City owners Joel Beverly and Amelia Kirby that they have played a big part in his musical endeavor.

“It gave us a place to hone our skills,” said Harris, who also has played several times at StreetSide Grill & Bar, which opened about five years after Summit City.

In addition to playing at open mic nights at Summit City, Breeding and Harris have opened for some of the larger bands with national followings that have performed there.

“There have been some crazy- good bands play here,” said Harris.

Young said she has enjoyed being able to listen to live music in downtown Whitesburg.

Although Breeding, Harris and Young wouldn’t reveal the titles of the songs they will be playing Saturday night, Harris said it would be “a good eclectic mix” of cover songs and original tunes. The trio will perform songs together as well as individually.

“We’ll mix it up — a couple of duets, a group song,” said Breeding.

Harris says it is a privilege to be asked to headline at an annual even which in the past has featured such acts as Aaron Tippin, Chely Wright, Goose Creek Symphony and Halfway to Hazard

The Country Music Road to Fame Competition was created by the state of Kentucky and sponsored by the Gibson Foundation and several other private and public corporations to spotlight musicians who live near Kentucky’s famed Country Music Highway (U.S. Highway 23 and roads that connect with it).

The late Gary Stewart, formerly of Payne Gap, is one of the country music legends with a plaque in their honor along the Country Music Highway. Other stars honored include Tom T. Hall, Loretta Lynn, Patty Loveless, Dwight Yoakam, Keith Whitley, Ricky Skaggs, Hylo Brown and The Judds.

After performing in front of about 1,000 people at the Road to Frame grand finale on July 13 at the Mountain Arts Center in Prestonsburg, Breeding was named first runner up. Young finished third and Harris came in fifth in the Road to Fame contest.

“The fact that three from the top 10 were from Letcher County speaks a lot,” said Harris.

Breeding, Harris and Young are scheduled to take the Mountain Heritage Festival stage at 8:30 p.m. on Saturday.