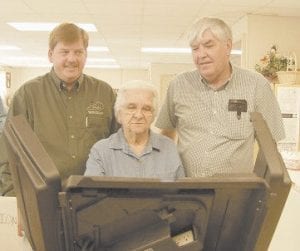 PRACTICING VOTING – Lizzie M. Wright, of Mayking, learned how to vote on the iVotronic Touch Screen Voting System the county purchased three years ago. Letcher County Judge/Executive Jim Ward (pictured at left) and Letcher County Court Clerk Winston Meade (pictured at right) showed Wright how to use the newer machine on October 15 at the Ermine Senior Citizens Center. No one in the Ermine precinct used the touch screen voting machine during the last election. Voters chose to use the old machine because they felt more comfortable.

As Election Day draws near, county officials are showing voters how to use touch screen voting machines instead of older ones with push buttons.

Letcher County Clerk Winston Meade and Letcher County Judge/Executive Jim Ward are visiting senior citizen centers this week to show people how simple the newer machines are to use.

“I just thought it was something that needed to be done to get the seniors familiar with the new machines,” said Ward. “The main reason of doing this is to get people out to vote and to show them that it is not hard to vote on these new machines.”

Meade said he is trying to make sure voters aren’t afraid of using the newer machines, which were first used last November.

“With a lot of elderly people, it is the fear of change and the fear of a computer,” Meade said.

Meade said the old machines won’t be around much longer and he wants the public to become accustomed to using the newer machines. The iVotronic Touch Screen Voting System is handicapped-accessible and is an upgrade from the older machines, he said.

“Eventually we are going to do away with the blue machines altogether,” said Meade. “The time is coming.”

Coleene Hart, an Ermine precinct worker, said no one at the Ermine location used the modernized voting machine during the last election. She said people are used to pressing a button next to each candidate’s name and seeing a yellow light beside each selection they choose.

“They can see everything right there,” said Hart.

Hart said she plans on voting on the old machine this election unless she has to use the new one. Each precinct will have two types of voting machines, a touch screen system and the older model.

Mayking resident Lizzie M. Wright said she voted on the old machine during the last election because she was more comfortable with it.

“A lot of people, when they come to vote, use the blue one because they feel more comfortable,” agreed Rhuford Hart, an Ermine precinct worker.

Meade and Ward spent Monday morning at the Ermine Senior Citizen Center talking with seniors about how easy the newer machines are to use.

“By the time you check all the flashing lights on the old machine, it is quicker to use the new machine,” said Ward.

Wright said she may give the newer system a try during this election now that she has been shown how to vote on the touch screen machine,.

“It looks easy,” she said. “I probably should use the new one.”