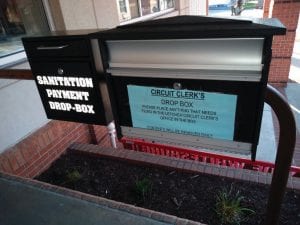 DROP BOXES OUTSIDE THE Letcher County Courthouse provide residents a place to drop garbage payments and court papers without having contact with another person in order to prevent the spread of COVID-19.

Get ready for the long haul.

That’s the message from Whitesburg Appalachian Regional Hospital as the world continues to struggle under the coronavirus that causes COVID-19.

“ I do not expect the masks and the social distancing go away until there is a vaccine,” hospital Chief Executive Officer Dena Sparkman said during a conference call with volunteers and others. “I do expect that to be the new normal.”

Experts say a vaccine could take 18 months to develop and test. In the meantime, people are likely to see periodic outbreaks of the illness, much as there are outbreaks of flu, and periods where people are asked to resume staying at home and closing non-essential businesses to avoid infection.

While President Donald Trump, on his Twitter account, has promoted protests at state capitals to open up businesses and a foundation run by the family of his Secretary of Education has paid for some of those protests, his White House has sent out four metrics to states with the requirements they should meet before opening.

Before opening should be reconsidered, states should document 14 straight days with decreasing numbers of new COVID-19 cases, testing programs in place for all healthcare workers, a decline in flu-like illnesses, and hospitals having enough protective gear for their workers and enough beds, ventilators and other supplies to treat all patients.

Kentucky Governor Andy Beshear, who has endured protests outside windows of the briefing room as he read the number of daily deaths and new cases of COVID 19, said none of those boxes have been checked yet in Kentucky. While the governor said Kentucky will reopen slowly and follow the guidelines sent out by the White House, other states are acting on Trump’s verbal desire to open the entire country up by May 1, just nine days from today.

Some other states, mainly deep red states in the South, are reopening now, despite having not met the metrics put out by health officials. Notably, while Kentucky plans to begin slowly by allowing hospitals to do some elective procedures again, Georgia’s governor announced this week that he is reopening hair salons, nail salons and tattoo parlors.

In Whitesburg, medical facilities are still struggling with obtaining some needed supplies. Mountain Comprehensive Health Corporation CEO Mike Caudill said the rural health provider has been able to obtain enough personal protection equipment and can still send tests to private labs. A new machine the company purchased to do quick tests for the illness here can’t be used for that purpose because of the lack of a reagent used in the test. He said he does not know why that hasn’t been provided.

“Your guess is as good as mine. They have failed to live up to their delivery deadline,” he said.

The hospital has had problems obtaining kits used for testing, Sparkman said. She said the University of Kentucky has given ARH a number of slots on its lab machine to run tests, but it has done little good.

“Because of the scarcity in the swabs and the other materials, they still only recommend we test those that are symptomatic,” she said.

The hospital is also recommending that patients who use inhalers bring their own if they have to be admitted.

Sparkman said that many inhalers have 120 metered doses. If the hospital provides an inhaler and the patient only stays for five days, the rest of those doses are wasted.

The hospital has received 57 homemade masks to give to patients, and has sent those to the central laundry for sterilization. Employees are reusing masks that would normally be used only once. Those masks are now only thrown away if they are soiled or had an aerosol on them from coughing or sneezing.

In order to get around that problem, the hospital has purchased N100 refilter masks, which are made of plastic and rubber with two large cartridges on the side. Those masks are being used in the emergency room, and can be sterilized the same way that operating room equipment is.