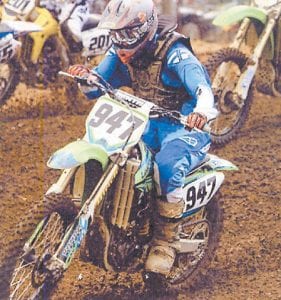 Motocross racer Donnie Adams of Letcher County is seen in photo at right and on his racing bike above.

Letcher County racer Donnie Adams is starting to get some attention on the national motocross (MX) scene, and he is doing it without a national sponsor.

The 26-year-old Adams, who lives at Cowan, races as a “privateer” on a nearly stock Kawasaki without a factory sponsor, yet he still competes strongly against national riders on factory bikes. As motocross has become more popular nationwide, the cost of competing has skyrocketed, so it is rare for privateers to consistently compete with the factory riders.

Adams’s mother, Patsy Adams, who works at Appalshop in Whitesburg, said Donny’s success has come from hard work and has been the project of family and friends.

Adams earned a top ranking at the prestigious Annual Air Nautiques/AMA (American Motorcycle Association) Amateur National Motocross Race at the Loretta Lynn Ranch in Hurricane Mills, Tenn., recently and earned one of 1,386 qualifying positions out of 20,000 racers who attempted to qualify. He took fourth place in the Junior 25 Plus class. The race pits riders against each other in three grueling races (motos) on a course set up at the center of Lynn’s ranch and campground. 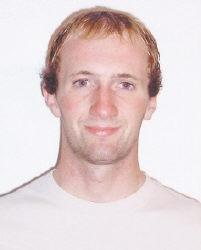 Most of the top MX racers in the United States, including Jeremy McGrath, Ricky Carmichael, and Travis Pastrana, have won the AMA National Championship Race at the Lynn Ranch and it is so prestigious, three teenage stars were awarded six figure pro contracts following the race. McGrath is considered the greatest American MX racer of all time and held championships in the 250cc and Supercross Series. Ricky Carmichael dethroned McGrath in the Supercross Series after dominating 125cc racing, and Pastrana is one of the premier riders in X Games competition and is the first rider to perform a double back flip on a motorcycle.

Adams placed behind Keith Johnson of Carver, Mass.; Timmy Weigand of Santa Clarita, Calif., and Nicholas Vaughn of Grand Rapids, Mich., but he led the race for several laps after pulling a “hole shot” to claim the lead. While many of the other riders compete on factory bikes, Adams rode his own. Patsy Adams said her son is starting to get some national recognition and hopes it will help him to obtain a contract with a national team. He currently has four regional sponsors — Lonesome Pine Motor Sports, Team Green, Vonda Coal Company, and Link- Ink Graphics. The real prize for MX racers is a factory ride though, which provides state-ofthe art bikes, unlimited parts and racing mechanics trained by the factory and current on the very latest in racing technology. Factory bikes are rarely for sale and never in the same year they race.

“We’ve struggled for years,” said Patsy Adams. “We don’t have the benefits the factory riders do, but he gets to ride with that level of competition so it makes it worthwhile.”

Patsy Adams said Donnie’s first bike was purchased at a yard sale and he has worked toward his goal of being a professional MX racer ever since. Adams received his pro license in 2004 but he had a major accident in the Mega Race Series in 2007 when he went down while leading the race and was run over by six other riders. The accident shattered his shoulder blade and cost him a good deal of time away from racing. However, Patsy Adams said her son worked hard on his rehabilitation and seems to be stronger than ever and is totally focused on his goal.

“Over the years, MX racing has been financially difficult to pursue as a privateer,” said Donnie Adams. “We don’t always catch the breaks factory riders do but my determination and desire to race have never lessened. My life revolves around racing and I plan to continue for as long as possible. I just want to thank all my family and friends for all their support.”