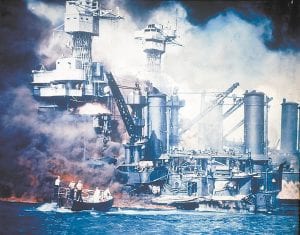 76 YEARS LATER — In this Dec. 7, 1941 file photo, a small boat rescues a USS West Virginia crew member from the water after the Japanese bombing of Pearl Harbor, Hawaii. Colby Adams, a 19-year-old sailor from Letcher County, was feared dead in the attack but was later found alive and well after his family had already received a telegram informing them that he was missing and presumed dead as a result of the attack. (AP Photo)

The skies over Honolulu, Hawaii, were iridescent blue and clear except for a few scattered clouds on December 7, 1941.

Like several other Letcher Countians, Colby Adams, 19, of Whitesburg had joined the Navy straight out of high school, and was serving on the U.S.S. West Virginia, docked at Pearl Harbor.

It was a Sunday. Soldiers and sailors were mostly preparing for church or still sleeping when the first Japanese bombers appeared low over the Pacific Ocean to the north, and began their runs, first on Hickam Field Army airfield at 7:48 a.m., then on the battleships docked at Pearl Harbor.

Ninety minutes later, the attack was over and 2,403 sailors, soldiers, airmen and civilians were dead. A total of 18 ships were sunk or run aground. The West Virginia, struck by six torpedoes and two bombs, was under 40 feet of water. In all, 116 of its crew died, 66 surviving for two weeks trapped below decks before finally suffocating or drowning.

On December 16, Townsel Adams of Whitesburg received a telegram that his son was among the dead. 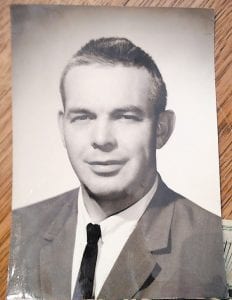 Colby Adams was found alive and well after bombing.

“The Navy Department regrets to inform you that your son, Olif Colby Adams, Seaman, Second Class at U.S.N. was lost in action in the performance of his duty, and in the service of his country,” the telegram read. “The Department extends to you its sincerest sympathy in your great loss. To possibly aid our enemies, please do not divulge the name of his ship or station. If remains are recovered, they will be interred temporarily in the locality where death occurred, and you will be notified accordingly.”

It was signed by Rear Admiral C. W. Nimitz.

T. Lee Adams, Colby Adams’s half-brother, recalled the crushing blow of hearing that his brother was dead, and his father’s reaction.

“My dad got all excited and went down and signed up (for the military),” Adams recalled recently. “And they took him — at 52 years old!”

But there was other business to attend to first.

Colby’s mother, Judah Hogg Adams, had died when he was a child, and he had been mostly raised by his grandparents, J. Wash and Cornelia Webb Adams. The family planned a funeral for that week. There was no body to bury, but a memorial service was held at the First Baptist Church, and his father prepared to leave for training.

“He was packing to go through his induction and Colby showed up,” T. Lee Adams said.

The Mountain Eagle reported on Christmas Day that Townsel Adams had received a second telegram on Saturday, Dec. 20, that Colby Adams was one of the survivors of the attack and had been rescued.

T. Lee Adams said his brother had been on shore leave when the attack took place, and was not on the West Virginia when it was sunk. In fact, he made it through the whole war alive. He worked in several jobs before moving to Lexington to work in real estate. He is buried at Mayking.

Their father, too old to be sent to the front, was made a captain and sent to open a winter training camp in Douglas, Wisconsin. In the end, the war killed him, too, though he was never wounded. The elder Adams suffered a heart attack while preparing for the D-Day invasion and never fully recovered, T. Lee Adams said.