Local stations can be anything but on satellite TV

By GRANT SCHULTE
The Associated Press 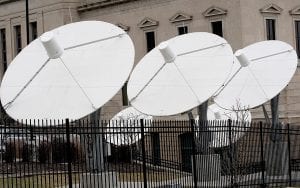 Satellite dishes are seen on the property of KETV, an ABC-affiliated television station in Omaha, Neb. An estimated 500,000 households nationwide don’t have access to local broadcast channels because of a complicated federal law and a decades-long dispute between local broadcasters and satellite television providers. Households in the nation’s “neglected markets” — rural areas that can’t get local broadcast signals — are forced to rely on satellite service with news from other states. (AP Photo)

EDITOR’S NOTE: Satellite TV subscribers in a large portion of Letcher County and other parts of eastern Kentucky are among 500,000 viewers across the nation who can’t get can’t major network programming — ABC, CBS, FOX, NBC, and PBS — from instate stations. As the following report points out, there are 12 such “neglected markets” across the country.

When Dianne Johnson channel surfs for news in her rural western Nebraska home, all she sees are stories about Colorado crime and car crashes from a Denver television station more than 200 miles away.

It’s frustrating for the 61-year-old rancher, who wants to know the latest developments in Nebraska politics and sports. When floods devastated huge swaths of Nebraska this year, Johnson struggled to keep tabs on what was happening.

“If we actually had local news, we would watch it,” she said. “But all we get is Colorado drug busts and stories about who got murdered in Denver. It has nothing to do with us.”

Johnson is among an estimated 870,000 households nationwide that receive at least one distant network affiliate’s feed from their satellite TV service providers because they don’t live close enough to get conventional over-the-air signals. With no local TV news stations and a dwindling number of newspapers, many rural Americans are finding it increasingly difficult to track local elections or government decisions that affect their lives.

“It’s your connection to what’s going on in your community,” said Jim Timm, president and executive director of the Nebraska Broadcasters Association.

Johnson’s plight is part of a congressional dispute pitting local broadcasters against satellite television providers, who are frequently the only option for viewers in America’s most remote corners.

Caught in the middle are the nation’s “neglected markets” — remote areas that can’t get local broadcast signals, forcing viewers to rely on satellite service that shows them news from other states. Two of the 12 “neglected markets” are in Nebraska, in regions with several of the nation’s least-populated counties. The others are in rural corners of Kentucky, Texas, Wyoming, Colorado, Iowa, Missouri, Montana, Maine and Michigan.

For many of those areas, two separate issues are at play.

The first is a federal law that lets satellite providers import distant broadcast signals to those “neglected markets” at a steep discount, even though the local news subscribers see may not be relevant.

In western Nebraska, satellite subscribers might see news from Rapid City, South Dakota, or Denver, which are often geographically closer than Nebraska’s largest cities, Omaha and Lincoln. Others who subscribe to AT&T-owned DirecTV end up watching news, weather and commercials from a Los Angeles network affiliate, even though there are local stations much closer to home, in North Platte and Scottsbluff, Nebraska.

“Instead of a tornado hitting the ground in North Platte, they’re hearing about sunny beaches in L.A.,” said Shannon Booth, a general manager for Gray Television who oversees the company’s stations in Lincoln, Hastings and North Platte.

The law was initially passed in 1988 to help small, fledgling satellite TV providers compete with cable companies that were viewed as monopolies at the time. It’s set to expire at the year’s end, but satellite providers are lobbying Congress to extend it for another five years.

Nebraska broadcasters who want their content beamed to those households say the law is outdated because satellite companies are much larger now and shouldn’t receive what amounts to a federal subsidy.

If the law does expire, satellite providers would no longer be able to send distant, out-of-state programming to rural viewers and would likely have to pay more because they’d be required to negotiate with local broadcast stations. Broadcasters could then expand into areas they don’t currently reach.

Satellite TV providers argue that that law protects consumers by requiring broadcasters to negotiate in good faith over the fees that satellite companies are required to pay them for access to their shows. Even with the law in place, those fees have risen from $215 million in 2006 to $11.9 billion this year, according to the American Television Alliance, a satellite and cable TV industry group. The expense is often passed along to subscribers.

In a statement, AT&T said broadcasters “routinely hold consumers hostage” with television blackouts if satellite providers don’t agree to pay the rising fees. A company spokesman pointed to a Federal Communications Commission ruling last month that ordered a group of broadcast stations to go back to the bargaining table with AT&T, concluding that the stations hadn’t negotiated in good faith.

Cable and satellite providers are under financial pressure because customers have been dropping them for cheaper streaming services. Local broadcasters are still generally profitable, but they also face declining viewership and stagnant advertising.

“Nothing prevents local broadcasters from investing in their local communities, extending the reach of their signals and providing these customers free, over-the-air signals,” Rob Thun, an AT&T executive, said in testimony last month to the Senate Commerce Committee.

Booth, though, said doing so would be practically impossible because it would require federal approval, and for nearly a decade, the FCC has prohibited stations from expanding their transmission facilities or constructing new TV translators that would widen their reach.

The second challenge for rural viewers is a federal law that sets the boundaries for the nation’s media markets. In Nebraska, 16 rural counties are in the Denver or Rapid City media markets, based on a map drawn by Nielsen Media Research. Despite being in Nebraska, satellite television subscribers in those markets only get news from Colorado or South Dakota-based stations.

Counties can appeal to the Federal Communications Commission for access to Nebraska-based news, but the process is complicated and time-consuming, said Jordan Dux, director of national affairs for the Nebraska Farm Bureau, which has followed the issue.

Legislation sponsored by Nebraska Sen. Deb Fischer and Rep. Adrian Smith would create an exemption that would give their constituents access to news out of Scottsbluff. But the measure’s prospects are unclear.

“There’s a level of frustration out there in areas of Nebraska that don’t have access to these local channels,” Dux said.

Dux said many of his group’s members aren’t happy that they can’t get news coverage of the Nebraska Legislature. Most legislative hearings and debates are live-streamed on the Internet, but Dux said some Farm Bureau members don’t have access to high-speed connections.

It’s a major hassle for Jeff Metz, a fourth-generation farmer and rancher from Angora, Nebraska, whose nearest neighbor is four miles away.

Metz, 53, relies on satellite television coverage but the closest local stations he can get are from Denver, nearly 175 miles away.

Metz said he’d like to follow Nebraska legislative news, weather, and local cattle and commodity markets, but the out-of-state stations don’t offer any coverage. His local newspaper has gotten smaller and more expensive, but Metz said he feels fortunate to have anything at all.

“I don’t care if it’s snowing in Denver,” Metz said. “People like to know what’s going on locally.”