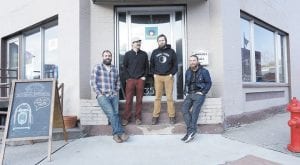 Roundabout Music Company owners (from left) Josh May, Jonathan Hootman, Matthew Carter, and Ben Spangler posed recently in front of the downtown Whitesburg store. In business for less than a year, the store is participating in Record Store Day 2015 on Saturday, April 18. (Photo by Coleman Larkin Schmidt)

The owners of a Whitesburg music store hope what has already been a good first year becomes even better this Saturday when the store participates in its first national “Record Store Day” promotion.

Roundabout Music Company, located on East Main Street, is one of about 1,400 independently owned record stores across the U.S. that will participate in Record Day 2015.

While April 18 marks the first time the event will have been held in a southeastern Kentucky record store, it will be the seventh such event nationally since Record Store Day kicked off in one San Francisco store on April 19, 2007. Now celebrated on the third Saturday of every April, Record Store Day has become known as the “world’s biggest music holiday.”

Among the nearly 400 limitededition vinyl album and CD recordings being featured at some of the participating stores this year are releases by classic rockers Jethro Tull (“Live at Carnegie Hall” on 180-gram black vinyl) and The Doors (a mono vinyl version of their 1967 second album “Strange Days”); 1970s disco stars Bee Gees (a 12-inch vinyl promotional style release of “Staying Alive” and “Night Fever,” backed by “More Than a Woman” and “You Should Be Dancing”); soul legends Marvin Gaye (a double A-sided 7-inch single celebrating the 50th anniversary of “How Sweet It Is (To Be Loved By You)’ and Otis Redding (a double vinyl edition of the albums “Otis Blue” and “Otis Redding Sings Soul”), and country music icons Dolly Parton (a vinyl version of 1999’s “The Grass Is Blue”) and Willie Nelson (a gold vinyl copy of the 1998 album “Teatro”). 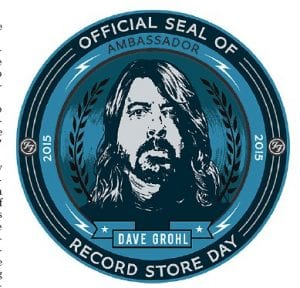 Musician Dave Grohl of Foo Fighters, formerly of Nirvana, is the “official ambassador” of Record Store Day 2015, which will be observed this Saturday (April 18) at Roundabout Music Company in Whitesburg.

Offerings by other music legends such as Frank Sinatra, Johnny Cash, Simon & Garfunkel, Bruce Springsteen, Metallica and Johnny Winter will be on hand at some participating stores, while newer music will be offered by acts such as Blackberry Smoke, Father John Misty, Mastodon, Temples, Tegan & Sara, Vampire Weekend, and St. Paul and the Broken Bones (an Alabama based soul-rock band that performed at Summit City in Whitesburg before breaking nationally).

An offering of Rolling Stones covers by the power trio Gov’t Mule will be available on a vinyl album entitled “Stoned Side of the Mule.” But with only 4,750 copies of that recording produced for distribution across the U.S., it is not known whether it will be available in Whitesburg.

“We’ll have a bunch of stuff,” Roundabout Music’s Matthew Carter said of the many offerings that were available for the store to choose from. “We kind of threw a dart and hoped it landed on something cool.”

A poster publicizing the event says Roundabout will be offering “exclusive releases” by John Prine, The White Stripes, Bob Dylan, and Polaris as well as special recordings from “Sun Records and more.” In addition to Saturday’s limited edition vinyl albums and CDs, Roundabout will also feature an in-store performance by the popular Letcher County band Wayne Graham, set to begin at 2 p.m., as well as custom T-shirts designed by local artist Lacy Hale.

Had Roundabout Music not decided to participate in Record Store Day 2015, local music fans would have to drive to Johnson City, Tennessee or to London or Lexington in Kentucky to have any chance of purchasing any of the limited edition recordings that will be available on Saturday, some of which number 500 or fewer copies.

It was the lack of any local option of participating in events such as Record Store Day that persuaded Carter and three other local music collectors — Jonathan Hootman, Josh May and Ben Spangler — to open Roundabout Music Company on June 6, 2014.

“Where we collect records we knew if we were going to buy any we had to get to Johnson City or Lexington,” said May.

Carter, a Pike County native, became acquainted with May, of Magoffin County, and Spangler, of Craft’s Colly, about 12 years ago when the three were high school students attending a series of punk music concerts at the old Boone Motor Company building in Whitesburg. They eventually met fellow vinyl record collector Hootman, a Mansfield, Ohio native who works as a mammalogist for Whitesburg-based Apogee Environmental and Archaeological Inc. The other three owners also have full-time jobs elsewhere that keep them from having to depend on the record store for their income.

Last Wednesday, Carter, Hootman and May gathered at the store to talk about their first year. Spangler had to be away on other business. Carter and May agreed with Hootman that the first 10 months on the job was a “giant experiment” and “an expensive learning experience” that has also brought about “a lot of growth.”

“It’s been a good first year,” said Hootman, who along with Carter and May credit part of Roundabout Music’s success to Hunsaker Properties, which owns the building, and its manager Amy McDougal.

“A key ingredient is we have a landlord that worked with us and we got a decent rent,” said Hootman.

“When you’ve got landlords in town that want to support businesses in town that’s a major ingredient,” added May. “We’re really happy with our landlords being supportive of us.”

Carter, Hootman and May want people to know that Roundabout is a “complete music store.” They note that the store sells a large variety of used musical instruments on consignment and equipment for musical instruments such as strings and straps for guitars and banjos, banjo heads and drumheads. They also point out that Roundabout sells affordable turntables for those wishing to enter the world of vinyl music, and will repair old turntables that have been sitting unused for too many years.

If your old turntable is in working order but only needs a new needle, Roundabout Music can probably x that, too, as the store was recently able to purchase a large supply of replacement needles.

“It’s the most satisfying thing on Earth,” said May of finding the right replacement needle for a grateful customer.

10 or less. The store is also happy to order new releases on either vinyl or CD.

While Roundabout Music carries vinyl albums that reflect the styles of music its four owners enjoy, most of the store’s sales come from used releases by second-generation classic rock bands and musicians such as Boston and Peter Frampton, whose records sold by the millions in the late 1970s.

“Anytime we get something by Led Zeppelin in goes out that same week,” said Carter “The 2010s have been like the 70s all over again.”

May pointed out that almost every new title being released today, including re-mastered classic rock, is available on top-quality vinyl in addition to CD.

“A lot of people don’t realize new albums are being pressed on vinyl,” he said.

“We encourage anybody who has an album to come in,” he said. “We’ll put any local musician’s) CD or album in here.”

“We get new people in here every week,” he said.

I always ask how they find out about us and it’s always different.”

Roundabout Music Company is located at 357 Main Street and is open Tuesday through Saturday from noon until 8 p.m. Persons wishing more information about Saturday’s event may call 633-5030.

For more information on which limited edition recordings are being shared among the 1,400 stores that will participate in Record Store Day 2015, visit the website www.recordstoreday.com.

Roundabout Music has signed the “Record Store Day Pledge” in which the store agrees to act in the spirit of the event and sell the commercial Record Store Day releases to their physical customers on April 18; not to price-gouge customers or hold products back to be sold online.