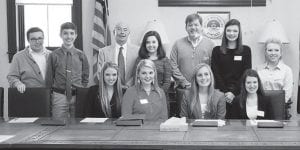 This White House budget proposal makes available $1 billion for land reclamation, $55 million for job training, and strengthens healthcare and pension for 100,000 coal miners. The vote, which took place in the Whitesburg City Hall, was unanimous.

The ARI Student Senate is part of the Race to the Top Grant given to the Kentucky Valley Educational Cooperative (KVAC) and is comprised of senior and junior high school students from 17 school districts in the region.

Kiley Short, a junior senator from Letcher County Central High School, spoke at the meetin. She said, “This POWER+ Plan can remove the need for people to leave. It stimulates economic growth and business opportunities, which are imperative to the fate of my home, my culture, my people, and my future.”