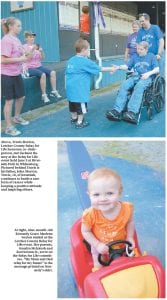 Letcher County residents have raised more than $155,000 this year to benefit the American Cancer Society.

After months of fund-raising for Letcher County Relay for Life, 23 teams gathered together at Riverside Park on June 3 to raise cancer awareness, celebrate cancer survivors and remember those who have died from cancer.

Alberta Perry, chairperson for the Letcher County Relay for Life Committee, said fund- raising efforts have totaled $155,181.14, but that amount will continue to increase because the fiscal year doesn’t end until August.

This is the 15th year Letcher County residents have participated in a Relay for Life event. Money is raised during the year through various fund- raisers including bake sales, carwashes and raffles.

“We put a lot going into that thing,” said Perry. “It’s an ongoing thing for six months.”

At the beginning of the event, cancer survivors walk a lap around the track. Later on in the festivities, luminaries are lit in memory of those who died from cancer.

People set up tents along the track and participate in different activities throughout the night. Perry said more than 1,200 people attended this year’s event with about 50 people staying until 7 a.m. on Saturday.

“I think it is the best one we have had thus far,” said Perry, “not only because of the money we raised. The field looked the best it has ever looked. I couldn’t have asked for the weather to be any better.”

In 1985, Gordon Klatt, a colorectal surgeon from Tacoma, Wash., walked around a track at the University of Puget Sound in Tacoma for 24 hours to raise money for the American Cancer Society in honor of his patients. Klatt raised $27,000 by walking about 83 miles with people paying $25 to walk with him.

In 1986, Klatt organized a small team of people to walk with him in what was the first Relay For Life event. Now millions of people participate in Relay for Life events in more than 5,000 communities nationwide.

Letcher County residents receive services from two programs that started in the county three years ago. The “Reach to Recovery” program pairs breast cancer survivors with newly-diagnosed breast cancer patients to provide support and comfort through their battle with cancer. Marie Amburgey, an employee at Whitaker Bank, is a cancer survivor, who volunteers her time with the “Reach to Recovery” program.

The “Look Good, Feel Better” program helps cancer patients who have lost their hair receive wigs and turbans. Members of the program also receive a free makeup kit and meet with Charlene Mason, co-owner of the Copper Comb Beauty Salon. Mason teaches cancer patients how to care for their hair and skin while going through treatments. To make a reservation, call Mason at 633-2426.