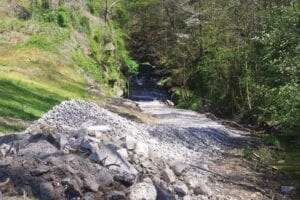 GRAVEL BLOCKS THE TANGLEWOOD TRAIL leading to the old railroad tunnel at Whitesburg. Completion of the trail through the tunnel is one of several projects underway by the Letcher County Tourism Commission. (Photo by Sam Adams)

The Letcher County Tourism Commission and EKY Heritage Foundation are preparing to accept proposals from architects to begin a master plan for the Thunder Mountain Resort envisioned for just outside the Whitesburg city limits at Marlowe.

The original idea for the shooting sports resort called for sport shooting and firing ranges for skeet, trap, rifle, pistol, sporting clays, five-stand, archery and 3D archery as well as casting ponds, an obstacle course and a paintball course. Plans include a campground, recreational vehicle hookups, a bathhouse and picnic areas, as well as other amenities.

The money awarded in the fall of 2019 is a reimbursement grant, so the money has to be spent first and then reimbursed by the government on a monthly basis.

The project is one of several advancing through the tourism commission as the increase in COVID-19 vaccines and a decrease in cases portend increased travel this summer. While Thunder Mountain is still years away, other projects are either underway already or close at hand.

Radio building on Jenkins Road in Whitesburg, with only lighting and tables left to be put in place.

“We’ll probably have a ribbon cutting there in the middle of May,” commission chair Missy Matthews said Monday.

The commission and the City of Whitesburg are also expected to complete graveling a loop of the Tanglewood Trail this spring that will carry the trail through the old railroad tunnel at Tunnel Hill.

Matthews said there has also been some indication that the commission may be getting closer to receiving a $193,000 Land and Water Conservation Grant to improve recreation around Fishpond Lake.

She said the commission has received some questions for clarification from the grant maker, and it looks favorable right now. If the county receives that grant, it must be matched dollar for dollar, but it can be matched with “in kind” services, such as heavy equipment and labor. In all, she said the project is expected to cost about $400,000 in cash and in-kind contributions and will include a visitor center, improvements to RV sites and picnic shelters, improvement of bathrooms, and the addition of a bathhouse and a laundry.