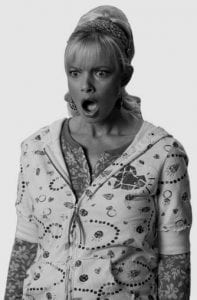 Anchorwoman: Remember “Stacked,” the Pamela Anderson sitcom whose basic premise was “hot babe gets real job”? This new show is like that with a twist: It’s all true. It follows model Lauren Jones as she starts a new gig as a television news anchor in Tyler, Texas. She’s definitely easy on the eyes, but with no journalistic credentials whatsoever, she faces an uphill battle to convince her co-workers there’s more to her than her looks.

My Name Is Earl: How about that, Earl? You weren’t a total screw-up before the list. Joy’s (Jaime Pressly) pregnancy has Earl (Jason Lee) flashing back to when she was carrying what may or may not have been his child. His own father (guest star Beau Bridges) persuaded him to stay with Joy and the baby even if it wasn’t his. He did! He did something right! Ethan Suplee also stars in “Guess Who’s Coming out of Joy.”

Miss Teen USA 2007: Here she is … no, wait, that’s a different pageant. This one, kid cousin of Miss USA and Miss Universe, is for a younger class of beauty queen – 15 to 19 years old. Pasadena, Calif., hosts this year’s pageant, which culminates in the crowning of a new Miss Teen USA by outgoing titleholder Katie Blair of Montana.

Bob Saget: That Ain’t Right: Why, Danny Tanner, where did

you learn those words?

for his G-rated portrayal

special, his second for the cable channel, is definitely not for kids. If you can wrap your mind around squeaky-clean Saget riffing on snuff videos and animal sex, you’ll have a blast.