Local vaccine rates are on the rise again 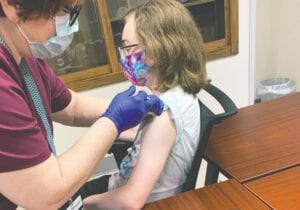 JUST A STICK – Grant Barto, 14, son of Sally Baker and Derek Barto, both of Whitesburg, was the 5,000th person in Letcher County to receive the COVID-19 vaccine at Whitesburg Appalachian Regional Hospital. (Photo courtesy Whitesburg ARH)

The number of people receiving the COVID-19 vaccine in Letcher County is moving up again as young teens became eligible for the shots last week.

Meanwhile, Whitesburg Appalachian Regional Hospital last week gave its 5,000th vaccine shot to 14-year-old Grant Barto of Whitesburg. While the Letcher County School District reported low interest from students in the vaccine, the hospital has been seeing young patients at a brisk pace. Last Thursday, the first day the vaccine was available locally to those under 16, the hallway at the hospital was teeming with parents and young teens waiting for their shot.

Despite relaxing the mask mandate and increasing the capacity of restaurants and bars, the number of new cases here has remained low. The incident rate for Letcher County on Tuesday was 2.7 per 100,000, the same as the Tuesday before.

Total cases on Tuesday were 1,927, up just eight from a week before. Deaths were up one to 45, and the percentage of the population fully vaccinated was up half of a percentage point to 34.1.

The incident rate in Letcher was the lowest of any of the surrounding counties. Harlan County is second lowest with a rate of 14.8.