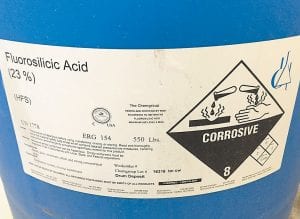 The warning label shown here is affixed to a 50-gallon drum of fluorosilicic acid, which the Whitesburg Waterworks uses to fluoridate the city’s drinking water supply. The federal government has recommended cuts in the level of flouride, which has been shown to help prevent cavaties.

Operators of the four public water systems that serve Letcher County are expected to wait for instructions from state officials before lowering the amount of fluoride added to local drinking water supplies.

The federal government has announced it is lowering the recommended amount of fluoride in drinking water because some kids are getting too much, causing white splotches on their teeth.

It’s the first change since the government urged cities to add fluoride to water supplies to prevent tooth decay more than 50 years ago. Now, fluoride is put in toothpaste, mouthwash and other products as well.

One study found about 2 out of 5 adolescents had tooth streaking or spottiness. It’s primarily a cosmetic issue, said Deputy Surgeon General Boris Lushniak, in announcing the new standard.

Chris Caudill, water maintenance director for the City of Whitesburg, said Tuesday that local water plant operators had not yet received any direction from the Kentucky Division of Water on the new recommendation. 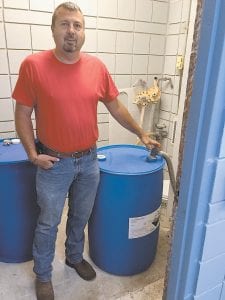 “As far as the state-recommended level, the regulations have not changed,” said Caudill.

Since 1962, the government has recommended a range of 0.7 mil- ligrams per liter for warmer climates where people drink more water to 1.2 milligrams in cooler areas. The new standard is 0.7 everywhere.

According to Caudill, the 1,250-customer Whitesburg Waterworks now uses 1.04 milligrams of fluoride per liter of water produced. Similar amounts of fluoride are added to the drinking water produced by the Letcher County cities of Fleming-Neon and Jenkins. The Letcher County Water and Sewer District also provides it customers with fluoridated water, much of which is produced by Whitesburg and the Knott County Water District. The National Center for Disease Control says all water systems in Letcher County, including a water well at Arlie Boggs Elementary School in Eolia, have been adding at least 0.7 milligrams of fluoride per liter. 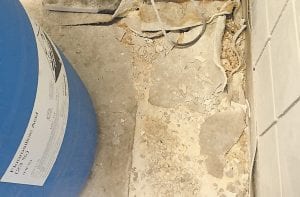 As this photo shows, fluorosilicid acid can be corrosive in its pure form. (Eagle photo)

Because the mineral fluoride is naturally in raw water and soil in Letcher County, Caudill said Whitesburg Water Plant operators have to carefully monitor the fluoride levels.

“We have to adjust it every day,” he said.

About 70 years ago, scientists discovered that people whose drinking water naturally had more fluoride also had fewer cavities.

Grand Rapids, Michigan, became the world’s first city to add fluoride to its drinking water in 1945. Six years later, a study found a dramatic decline in tooth decay among children there, and the U.S. surgeon general endorsed water fluoridation.

Today, about 75 percent of Americans — and nearly all Kentuckians — get fluoridated water.

But adding fluoride was — and has remained — controversial. Opponents argue its health effects aren’t completely understood and that adding it amounts to an unwanted medication.

Among the more recent dust-ups: Portland, Oregon, voters rejected a proposal to add fluoride two years ago. Sheridan, Wyoming, this year resumed adding fluoride; the city stopped in 1953 after a referendum.

Like most public waterworks, Whitesburg’s gets its fluoride from fluorosilicic acid, which arrives at the plant in 50-gallon barrels, each at 23 percent. Before it is diluted, fluorosilicic acid is a corrosive capable of eating away concrete.

Caudill said the Whitesburg plant goes through about six barrels of the acid per year, at a cost of about $600 per barrel, while producing 575,000 gallons of drinking water per day.

Lushniak added: “It is the best method for delivering fluoride to all members of the community.”

Water fluoridation is mandatory in Kentucky for most water supplies. In 1951, the City of Maysville became the first community in Kentucky to fluoridate its water supply, says the Kentucky Department for Health.

Unpublished federal research found there’s no regional differences in the amount of water kids drink. So it makes sense for the same levels to be used everywhere, health officials said.