The Sprint Cup Series now schedules 36 races a season, and in recent weeks there has been plenty of discussion about whether the sport might be better served by reducing that number.

Thirty-six may seem like a lot of races, especially when the schedule runs from February to November, but when you look at it from a driver’s viewpoint, there are only 36 opportunities to celebrate a win in victory lane.

Every driver takes the green flag each week with the dream of being the first to see the checkered flag at the end of a long race. But the truth is there are some drivers who need the victory more than others. For some, a victory could go a long way in securing a spot in the all-important Chase with the opportunity to run for the championship. For others a win could give a driver some job security.

This past Sunday at Pocono, Joe Gibbs Racing’s Joey Logano captured the second checkered flag of his young career. Speaking over his in-car radio as he ran his victory lap, Logana said it was great to win one “the right way.” Logano was speaking of his first win, which took place at New Hampshire in 2009 in a rain-shortened race. Regardless of the circumstances surrounding his first victory, a win in this sport is to be treasured. Evidently, 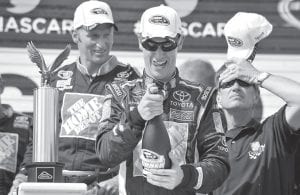 Logano still felt the need to prove to the rest of the series that he was capable of winning without the help of Mother Nature.

The win couldn’t come at a better time for Logano, as rumors have been circulating in recent weeks in the garage area that his tenure at JGR may be coming to an end. It is sometimes hard to remember that Logano is still just 22 years old, as Gibbs signed him long before his 18th birthday as a developmental driver. Since NASCAR will not allow a driver to participate in its major series until they are 18, the young driver began logging hundreds of miles with JGR’s testing team that was preparing the organization’s “car of tomorrow.”

Once old enough to finally get a license to compete in NASCAR, Logano began driving in the Camping World Truck Series and the Nationwide Series before making the leap to the Cup Series. He was successful along the way and was competitive at the Cup level, but when compared to the other drivers that have called JGR home he has found himself still looking for the kind of success that those drivers enjoyed while driving for the NFL Hall of Fame coach.

So it is kind of easy to see where Logano was coming from when he made his winning “the right way” remark before he ever exited the car in Pocono’s victory lane. This was the win he needed so badly, and while it may or may not be enough for him to keep his ride at the end of the season, the puts him in the hunt for making the Chase as a wild card.

The weekend he put together may have shown what he and his crew chief Jason Ratcliff are capable of doing. The duo are in their first year together competing at the Cup level after racing together for JGR in the Nationwide Series. Greg Zipadelli had been Logano’s crew chief for his entire Cup career, but left at the end of the 2011 season to become competition director for Stewart-Haas Racing.

Logano sat on the pole at Pocono and was consistently fast all weekend in practice. But it was the way he ran down veteran Mark Martin in the final laps of the race that showed the youngster does indeed have what it takes to win at this level. Martin bobbled with less than five laps remaining and Logano wasted little time in moving the veteran up the track while ducking underneath to go on and pull away for the win.

The win moved him to 15th in the points. While only the top 10 drivers in points automatically move into the Chase field at the end of 26 races, Logana now finds himself in third for one of the two wild card spots in the Chase. The two drivers with the most wins inside the top 20 receive the wild card berths. Since Logano now has won “the right way,” it could be that a spot in the Chase is within his grasp.