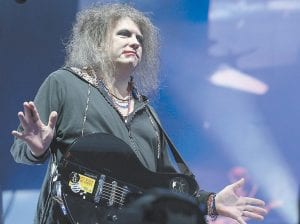 Robert Smith of The Cure performed on day 3 of Lollapalooza 2013 at Grant Park in Chicago. (AP photo)

On the first weekend of August, waves of people from diverse backgrounds gathered in Chicago’s Grant Park for Lollapalooza 2013. Though the crowd of many thousands hailed from cities and towns around the world, all were in downtown Chicago for the sole purpose of three days of music coming from 150 acts on eight stages contained in 319-acre Grant Park.

Lollapalooza (the word is defined as an extraordinary or unusual thing) originated as a farewell tour for Jane’s Addiction in 1991. Traveling across 26 different cities in the United States and Canada with 10 other bands, the first festival was a hit. Surviving through several Jane’s Addiction reunions and farewells, the traveling festival continued to thrive through 1997, but then went inactive until its revival in 2003.

After continuing as a road tour until 2005, Lollapalooza settled into Chicago where it continues to be a huge success. The festival has spread internationally to Brazil and Chile. The latest edition will be held in Israel later this year.

Though Lollapalooza’s success has spread around the world, the main event is in Chicago, and this year was no different. With a large percentage of the festival’s acts reappearing as “veterans,” this year’s fest had the comfort of familiarity.

Friday kicked off with acts that were new to the scene including The Neighbourhood, American Authors, Emeli Sande, Twenty One Pilots, and Atlas Genius. As the day wore on Lolla brought familiar faces back on stage with returning bands like rock act Band of Horses, indie electronic band Crystal Castles, and alternative rock band Queens of the Stone Age. As the sun started to settle down into the night, the crowd members began to make their final moves to the main stages to watch the last acts of the night.

With lead singer Trent Reznor’s tenacious vocal/ lyric combo paired with heavy strobe lights, the show was never dull. The group played songs that were heard during its very first Lollapalooza performance, including “Terrible Lie” and “Get Down,” as well as songs that became hits later on like “Closer” and “Only.”

After performing for 90 minutes, the band left the stage but came back for an encore. Before playing the final song, Reznor smiled and thanked the crowd for their support that night as well as 22 years ago. After booming applause, the group played “Hurt” and left the stage with a bow.

Day two of Lollapalooza was held on a Saturday and attracted a larger crowd then the day before. Festivalgoers seemed to distribute themselves evenly among the different stages that morning to watch acts such as Ben Howard, Matt and Kim, Local Natives, and Ellie Goulding. While big acts were performing, there were lesser known but equally talented acts performing on smaller stages. Among them were Haim, Brooke Waggoner, and Blondefire. Dusk brought the arrival of bigger acts such as Kendrick Lamar, Foals, The National, and The Lumineers.

Although all of these acts brought great excitement to the audience, the headliners kept the crowd eager with anticipation. Even though Mumford and Sons played on the largest stage and hosted the largest crowd of the night, secondary headliners The Postal Service played an equally impressive show.

The Postal Service is a side project featuring Benjamin Gibbard (front man of Death Cab for Cutie) and had quite a buzz surrounding its headlining set on the Bud Light stage. The band is on tour celebrating the 10th anniversary of its first and only album, Give Up. The band said that after the shows in Chicago, The Postal Service would cease to exist, making this show something not to missed.

Though a cloudless sky offered no sanctuary from the sun, a large crowd flooded the Chicago lakefront park for the festival’s third and final day on Sunday. Starting off strong, the morning’s line-up brought two English acts to the stage. This was fitting since evening’s headliner was none other than English new wave legends The Cure.

The first act of the day, Palma Violets, immediately the drowsy crowd woke up with its loud garage sounds. Following Palma Violets was Jake Bugg, who pleased the crowd and managed to be a stand out of the day’s line-up his retro blues and folk. As the sky eventually did usher in some relieving clouds, Lollapalooza veterans Tegan and Sara, Two Door Cinema Club, Grizzly Bear, and Vampire Weekend were on the stages.

While the setting sun began to hide behind the city’s skyscrapers, the festival’s largest crowd formed at the Main Stage and began chanting for The Cure, making it clear who they had all come to see. Though the crowd appeared to be losing patience, members were not disappointed when lead singer Robert Smith, wearing his signature heavy makeup on face, positioned himself behind the microphone.

Playing a 26-song set, the “mope rock” pioneers lit up the stage with the long list of greatest hits including “Friday I’m In Love,” “Pictures of You,” “Lullaby,” “Lovesong,” “Just Like Heaven” and “The Walk.” These songs turned the large field into a sing along.

Leaving the stage after the 20th song, the group reappeared for a six-song encore starting with “Love Cats,” finishing the festival with “Boys Don’t Cry.”