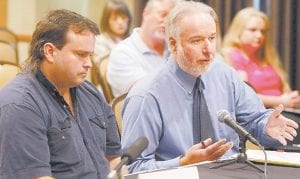 experiences in the Kentucky Darby mine disaster during a hearing in Lexington on Tuesday. (AP Photo/Courier-Journal)

The lone survivor of an underground explosion that killed five coal miners in Kentucky two years ago said this week he believes most of his co-workers would have survived if the federal government had required protective chambers stocked with oxygen supplies.

Paul Ledford of Dayhoit, a tiny mining town in the mountains of eastern Kentucky, escaped from the Darby mine in nearby Harlan despite the explosion and a lethal flash fire. Three of his co-workers suffocated, and two others died from injuries in the blast.

Now, the U.S. Mine Safety and Health Administration may require coal companies to provide protective shelters, known in the industry as refuge chambers, in all of the nation’s nearly 600 underground coal mines.

“I believe these chambers will help save lives in the future,” Ledford said Tuesday at a hearing held by the federal agency to gather public comment on the need for shelters. “They’ll be a safe haven for the miners in case of emergency.” 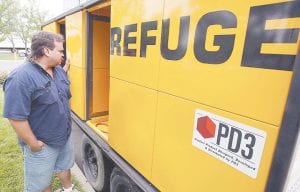 Paul Ledford, survivor of the Kentucky Darby mine disaster, looks into the Mine Haven manufactured by CD Safeshields, during a break of the hearing held by MSHA at the Hilton Suites in Lexington on Tuesday. (AP Photo/Courier-Journal, James Crisp)

Ledford recounted his ordeal in the Darby mine, where dust was so thick “you can’t hardly see your hand in front of your face.” Ledford said he prayed as he crawled along the mine’s rocky bottom, then lost consciousness.

“I just knew I was going to die in there that night,” he said, adding he awoke instead to the sound of an approaching rescue team.

The federal mine agency is considering a requirement that airtight emergency refuges be set up in the nation’s 589 active underground coal mines and any others that open in the future.

Another hearing on the issue is scheduled Thursday in Alabama. One was also held last week in West Virginia, where officials complained that the proposed federal regulations would conflict with state regulations.

Jim Dean, former interim director of the West Virginia Office of Miners’ Health, Safety and Training, said the federal proposal would require safety chambers that are too large, too close together and stocked with too many supplies. 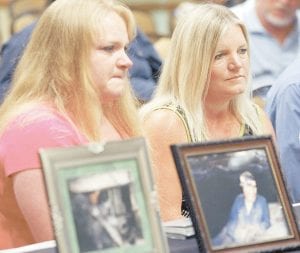 Tracy North, left, and Tilda Thomas spoke about Paris Thomas Jr. while sitting behind photos of him during the hearing held by the Mine Safety and Health Administration in Lexington. Paris Thomas Jr., father of North and husband of Tilda, died in the Kentucky Darby mine disaster near Harlan two years ago. (AP Photo/James Crisp, Courier-Journal)

The proposal under discussion would allow mine operators to build airtight rooms underground or place prefabricated chambers inside mines.

Either way, they would have to provide enough oxygen, water and other necessities to keep trapped miners alive for at least four days. The proposal would come in addition to a federal mine safety law passed by Congress after a series of tragedies in 2006 killed 19 miners.

Safety advocates in Kentucky favor the proposal, but recommended more stringent language to insure the refuge chambers would be close to all underground crews.

But Kentucky Coal Association President Bill Caylor said several mine operators in the state have already installed protective chambers and should be allowed to continue using those for at least 10 years.

“As an industry, we are committed to making refuge alternatives a viable option,” Caylor said.

Tracy North, whose father, Paris Thomas Jr., was among those who died in the Darby explosion, urged the strongest regulation possible be adopted.

“I wish he had a place where he could have went to be safe,” North said of her father. “Maybe he would still be here today. I hope that this goes through so the other mine families don’t have to experience the loss that we have.”

Lexington attorney Tony Oppegard, a former mine regulator, said he objects to one suggestion that coal operators simply make tools and materials available for miners to build refuge chambers in an emergency.

Oppegard said miners caught in life-threatening situations where visibility is near zero shouldn’t have to take time to build a shelter. In fact, he said, it may be impossible.

“It’s very difficult and anything you can do to prevent other families from going through this tragedy will be well worth your effort,” he added.

The agency estimates that requiring the refuge chambers would cost mine operators between $84.1 million and $102.6 million in the first year and between $38.7 million and $43.3 million a year after that.