Long lines may greet voters who don’t use mailFree Access 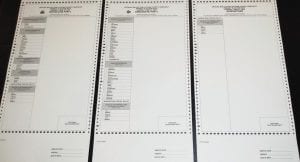 Primary election ballots will look different when the election is held June 23.

Letcher County voters who refuse to vote by mail may have a long wait on Election Day.

There will be only one polling place open for the June 23 Primary Election.

County Clerk Winston Meade said the state of Kentucky has replaced the old touch-screen voting machines, and there are far too few new machines to open polling places in the normal 30 precincts.

Rather than the purely computerized touch-screen units voters have become used to, voters will use a ballot marking machine called an Express Vote. When voters come into the polls, they will sign in using an electronic poll book, pick up a plastic stylus that they will keep in order to touch the voting machine screen, and a blank ballot. Voters will then insert the blank ballot into a machine, vote for their candidates and print the ballot. They will be able to review their vote on the computer screen and on the paper ballot before they insert their ballot into an optical scanner to be counted. The scanner will keep the paper ballot to allow for a recount.

Two of the new machines will be at Letcher County Central High School on Election Day. The third will be open for absentee voting at the courthouse up to Election Day, but will be closed that day. Meade said that is dependent on the state Board of Elections and could change.

Those who are voting absentee can request a ballot either by phone or, beginning this weekend, via the Internet.

Because of the COVID-19 pandemic, voters will be able to log on to a web site beginning this Friday to request an absentee ballot, and will have until Election Day to return their ballot to the courthouse, either by free mail or by leaving it in a drop box at the courthouse. No excuse is required to request an absentee ballot for the Primary Election, and officials are strongly recommending that everyone vote that way. Anyone who doesn’t vote that way will have to call Meade’s office and make an appointment to vote in person.

The clerk’s office has also set up a new telephone number to deal only with election-related calls. The number is (606) 536-9564.

Some voters have been very vocally opposed to absentee voting, insisting that they will stand in line on Election Day rather than vote absentee. It is not clear how serious they are, since turnout in the last primary election was 18.4 percent here, when voters had only to drive to their local precinct and walk in to vote. Turnout in the last presidential primary was 29.2 percent here.

“If they don’t want the absentees, then they can stand in line is all I know,” Meade said.

Meade said he is trying to make the voting easier by using two voting machines and three lines at the polling place — one for voters to check in, one to cast their vote and one to scan their ballot.

“We’ll just do the six-foot social distancing and everyone will have to wear a mask,” Meade said.

The county is supplying hand sanitizer and disinfectant, but Meade stressed that anyone voting has to bring his or her own mask. He said his employees are required to wear masks, but he has had to buy those with his own money rather than from the office accounts. He said voters who don’t want to wear a mask need to vote absentee.

“We can’t make anybody wear a mask, but we can deny them service when they don’t,” he said.

Meade said he has received calls at home and the office from people unhappy with voting by mail.

Unlike public officials in other states and the governor, Meade said he has not received any threats, but he was acutely aware of the violence and threats of violence others have endured.

In addition to the 12 poll workers that will be present on Election Day, there will be two National Guard members, in regular street clothes, to provide security at the polling place.

Meade said he has already reserved the District Courtroom for counting votes, a task that is usually performed in the deed vault in Meade’s office. That area is too small for people to stay apart. In previous elections, each person on the county board of elections, one representative of each party, and several clerks have been needed to count votes and enter the data into computers, which are then cross checked against the paper tape that comes from each machine. Meade said he’s not sure when mail-in votes will be counted. Mailin absentees have been counted the morning of the election, and are the first returns available when the polls close at 6 p.m.

“Usually, we start counting at 8 o’clock in the morning, but this time, I don’t know. They haven’t told us,” he said, referring to the state Board of Elections.