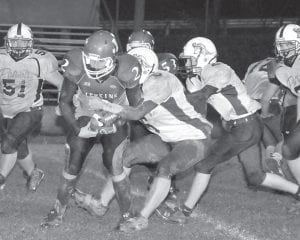 WRAPPED UP IN HIS WORK — Jenkins quarterback Kevin Brown is overtaken by the Knott Central defensive line during the Cavaliers’ win over the Patriots on Friday night. 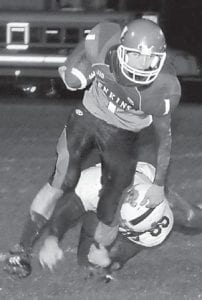 Pictured at right, members of the the Jenkins Cavaliers football team celebrated the end of their long losing streak at 24 games last Friday with a 33-16 homecoming win over Knott County Central at Jenkins. It was the Cavs’ first victory since defeating South Floyd in 2009. Above, junior Ryan Bentley escaped a Knott Central defender on a long run as the Cavaliers handed the Patriots their 27th straight loss. (Photos by Chris Anderson) 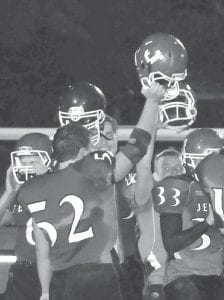