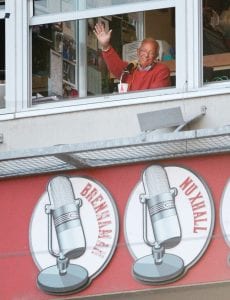 Cincinnati Reds broadcaster Marty Brennaman waves to the crowd during a baseball game against the Los Angeles Angels in Cincinnati in April 2013. Brennaman is retiring after the 2019 season. (AP Photo)

Steve Blass spent his boyhood afternoons in Connecticut flinging a rubber ball against the side of a half-barn, fantasizing that he was pitching in the majors. Come evening, the 10-year-old would get his radio and tune into a game, delighted when Mel Allen’s voice crackled from the transistor.

More than in any other sport, baseball broadcasters become an inseparable part of the game they describe. Their voices are the backdrop to all those warm summer nights. Their distinctive calls are part of the game’s lore. Fans visualize the action through their stories and descriptions.

“There’s definitely an intimate link between the fan and the broadcaster that is much more impactful and prevalent in baseball than in any other major sports,” Cincinnati Reds play-byplay man Marty Brennaman said.

Both 76, Blass and Brennaman are retiring after the 2019 season, ending long careers in the booth — 34 years for Blass, 46 for Brennaman. Throughout the decades, the wins and losses, and the historical moments they’ve witnessed and described, they’ve also experienced how much fans identify with their voices coming into their homes.

Brennaman teamed with former Cincinnati pitcher Joe Nuxhall for 31 years in the booth. Fans tuned into “Marty and Joe,” a pair of old friends who visited Reds fans nearly every day from March to October.

“ The longer you’re around, the more you become part of someone’s daily life, even approaching being a member of their extended family,” Brennaman said. “The time I realized what an impact Joe and I made was when we started getting mail addressed to ‘Marty and Joe, Cincinnati, Ohio’ — no address, no anything. And it went to the main post office downtown and they had no problem at all figuring out where it was supposed to go.

The game lends itself to those relationships and over the generations has become intertwined with those voices crackling from transistor radios tucked beneath pillows for night games — Jack Buck on KMOX in St. Louis, Ernie Harwell with WJR in Detroit, Bob Prince on KDKA in Pittsburgh, Chuck Thompson in Baltimore, Harry Kalas and Richie Ashburn in Philly and the great Harry Caray.

Unlike basketball or football or other major sports where the action is nonstop, baseball provides many opportunities for broadcasters to fill with stories and personal anecdotes. They weave in updates about their gardens and their travel experiences and their everyday adventures.

They do more than describe a jump shot or a touchdown catch or a goalie’s save. They share a bit of themselves.

“Baseball is the hardest sport of all to do well,” said Brennaman, who also has done college basketball play-by-play. “Basketball and hockey are comparable to winding up a windup toy and turning it on and it’s nonstop for two hours because of the pace of the game. You’ve got so much dead time in baseball that if you can’t ad lib cogently and intelligently, you can’t do it. If there’s a pure art form in play-by-play sports, it’s broadcasting baseball on radio.”

That down time also allows color commentators like Blass to bring the sport to life with stories that revive listeners’ memories.

“ To me, much of the game is about stories,” said Blass, who pitched for the Pirates from 1964-74, famously winning Game 7 of the 1971 World Series. “I think our game of baseball is unique. It has more stories than any of the other major sports. Baseball lends itself to the stories.”

The game wouldn’t be the same without their stories and signature lines. Their distinctive expressions become part of the game’s fabric and history, whether it’s Russ Hodges’ “The Giants win the pennant!” or Brennaman’s “This one belongs to the Reds” after a win or even Nuxhall’s “This is the old left-hander rounding third and heading for home” sign-off.

Hollywood recognizes the vital importance of baseball’s voices. Harry Doyle, played by Brewers broadcaster Bob Uecker, is an integral part of the movie “Major League” and has some of the most memorable lines — “Juuuust a bit outside.” Allen and his “How about that?” are part of the baseball scene in “The Naked Gun.”

Without the voices, it’s not baseball.

Some of the most familiar voices have left in recent years. The Dodgers’ Vin Scully — recognized within the business as one of the best ever — retired after the 2016 season, his 67th.

The business is changing as well.

More and more fans follow games on their computers, mobile devices and television, rather than radio. The novelty of picking up a game on a far-away station, albeit with a little static, is long gone, replaced by easy access to all broadcasts.

It’s unlikely that many up-and-coming announcers will want to stay with one team so long or do games on a daily basis. The tidal wave of analytics has changed the game and seeped into how it’s presented. Those calling the action have to be more concerned about reprisals for what they might say on air.

“I think we are the last of a dying breed,” said Brennaman, known for his directness on the air. “I quite frankly don’t think there are a lot of guys today broadcasting baseball that have a lot of personality. I think you can take one young announcer off one team and plug him into another team and it’s essentially the same guy.”

Fans in Cincinnati and Pittsburgh will get to enjoy those familiar voices for one last season. It’ll be bittersweet not only for them but other fans as well when they round third and head for home, as Nuxhall would say.

“I have people tell me, ‘You get me through the summer evenings,’” Blass said. “It’s so flattering.”