Looking back on 50 years in the bourbon business 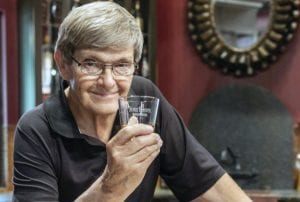 Al Young, 74, is the master distiller at Four Roses.

It wasn’t technically Al Young’s decision to submit an application at the Louisville Seagram Distillery in 1967. It was his wife, Gretchen — at that time his fiancée — who urged her beau to get a more stable gig than what his master’s degree in theater offered.

If she was going to start a family with this goofy, hardworking man, he needed a more routine job that paid a better wage than his position in public relations for Actors Theatre of Louisville did.

Young catches on pretty quickly to the ways of the world, and he understood immediately the age-old mantra, “Happy wife, happy life,” so he submitted his application to Seagram and began his job at the distillery on Monday, June 5, 1967.

Young, 74, also has a second milestone achievement, one that will be toasted around the world, as Four Roses Bourbon, a product of the old Seagram Distillery, honors Young with the 2017 Limited Edition 50th Anniversary Small Batch Bourbon.

Young is the brand ambassador and resident historian of Four Roses, but prior to this, he worked just about every job a distillery offers, including the prestigious distillery manager position, throughout those five decades. And he has no plans of slowing down now — but more on that later.

Though the bourbon was officially just released on Monday, the buzz from bourbon bloggers, aficionados and media who have gotten to try a sample is bountiful.

Local bourbon expert and author Fred Minnick called it “perfection” in his review for Whisky Advocate.

The day Insider caught up with Young, he had just read Minnick’s review of his bourbon, and a boastful smile appeared as he shared the news.

“Cracker Jack’s? That’s a new one, but I get it,” Young said. “Fred gets it. I wanted a Southern concept in expression, and he picked up on that.”

So what exactly does Southern mean when applied to bourbon? Young explained he was after some sweet notes — pecans, magnolia blossoms, honey, roses … you get the idea. And as we sipped the bourbon and reminisced about his last 50 years, flavors of those Southern winds sauntered across our tongues.

Young said he never expected to get a bourbon named in his honor. In fact, when he was called into master distiller Brent Elliott’s office a few years back, he was expecting maybe he’d get a pat on the back, or a commemorative watch.

“Brent said, ‘We’re coming out with a limited-edition release for your anniversary, and I need to know what you want it to be,’ ” recalled Young. “I was honored they even decided to do it. So I thought for a while, and then I set the perimeters of what I was looking for.”

Young wanted some of the bourbon that went into the small batch to be from when he was in charge of the distillery — from 1990-2007. And he wanted those previously mentioned Southern flavors to be in abundance.

Because Four Roses uses somewhat of a high-rye mash bill and its bourbon is known for its distinct spiciness, this was going to be quite a task for Elliott. But every rick house has its honey barrels, and the master distiller went to work creating a concoction Young had dreamt up.

“After he’s spent half a century handcrafting our product and guiding the Four Roses brand, Al’s 50th Anniversary Bourbon had to be as memorable as the man himself,” Elliott said in the product’s press release.

Elliott knew Young wanted older bourbon in his bottle, so he pulled together several ages of barrels — from 23 to 12 years old — and began mixing and mingling, adding and subtracting. He then called in Young, who blind tested a few samples and immediately honed in on one in particular.

“The uniqueness of the final product is the direct result of Al’s insistence on what he wanted to see in the bourbon,” Elliott told Insider. “Because this was Al’s release, we would not have released any blend he was not happy with.”

Four Roses is the only bourbon distillery that combines two mash bills with five separate yeast strains, creating 10 distinct bourbon recipes that are always noted on the bottles. Fans of the bourbon brand can name off the four-letter recipes faster than they can swallow a two-finger pour, and they know the nuances of each.

So we’re about to get technical.

In another nod to Young’s legacy, Four Roses decided to bottle the bourbon in a retro glass similar to what the product looked like in the late ’60s, when he first started at the company. The history of Four Roses

In 2010, he published “Four Roses: The Return of a Whiskey Legend,” a coffee-table book all about the birth and resurrection of the brand.

Young is indeed invaluable to Four Roses, as well as the bourbon industry in general. In fact, Young recalled a recent conversation with Kirin — the Japanesebased company that now owns Four Roses — president Yoshinori Isozaki.

He told Young, “You’ve got things in your head I can’t get anywhere else.”

Rutledge remembers an eager newbie ready and willing to learn everything there was to learn about distilling.

“Al was always very punctual, generally arriving early on his job, and paid attention to details and followed instructions and guidelines as provided by the distiller,” Rutledge told Insider.

Back then, Four Roses was only being sold overseas as a blended whiskey. Rutledge was a champion for the brand, and he insisted throughout the years it be brought back to the U.S. market and return to its roots as a premium straight Kentucky bourbon.

But it wouldn’t be until 1994 when Seagram finally let Rutledge have his way.

Up until then, Young worked his way through the Louisville distillery, and when it closed in 1983, he relocated his family — Gretchen and the three children — to Cincinnati to continue working at Seagram’s Lawrenceburg, Ind., distillery.

In 1990, Young was transferred back to Kentucky to work as the distillery manager at the Lawrenceburg, Ky., distillery, which is where Four Roses’ home base resides today. He moved his family to Lexington, where he and Gretchen currently live.

Around this same time, Rutledge returned to Kentucky as well from a stint at a Seagram’s distillery in New York, and in 1994, he became master distiller just as the brand was being returned to its original glory.

Al Young was inducted into the Kentucky Bourbon Hall of Fame in 2011.

Approximately 10,000 bottles of the 2017 Limited Edition 50th Anniversary Small Batch Bourbon will be distributed through the U.S. The proof of the bourbon is 107, and the suggested retail price is $150.