Looking for a miracle

Coping with diabetes while pushing for cure 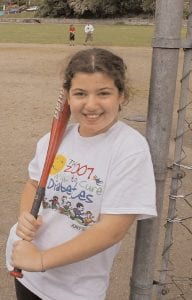 DREW PERINE/MCCLATCHY NEWSPAPERS Alexa Brenner, 10, was diagnosed with diabetes when she was 14 months old. She is the only girl on her school baseball team, the Green Gators.

lexa Brenner has it all planned out. There are two things she’s itching to do once researchers deliver a cure for diabetes.

“I’d like to take all my diabetes equipment and smash

“Then, eat a double fudge sundae.”

Scientists are inching closer to a cure. The Juvenile Diabetes Research Foundation International reports that a cure for type 1 diabetes – the kind Alexa has – is not only possible, but likely.

How soon a cure may reach Alexa is unknown. But it won’t be for lack of effort on her part.

Alexa has helped raise thousands of dollars for the foundation through its annual Walk to Cure Diabetes. She volunteers each year at a fundraising golf tournament. And this summer, Alexa joined a group of 150 kids from all over the country for the foundation’s Children’s Congress, an event aimed at drawing attention to diabetes research.

The kids attended congressional hearings in Washington, D.C., and offered testimony on the need for increased federal funding for diabetes research. And they told their stories about their daily struggle to stay alive. 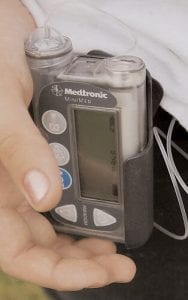 Alexa says she would like to smash all her diabetes equipment, including her insulin pump.

For Alexa, every day is a delicate dance between food, exercise and insulin, the hormone that enables people to derive energy from food. In type 1 diabetes, the pancreas (a spongy organ located behind the stomach) fails to produce enough insulin. The disease is an autoimmune disorder, in which the body’s immune system attacks the insulinproducing cells within the pancreas. Without insulin, the blood glucose (sugar) level rises, and the body cannot get enough energy to operate. Left untreated, diabetes can be fatal.

Between eight and 10 times a day, Alexa must prick her finger with a lancet, squeeze a drop of blood onto a test strip and insert the strip into a portable monitor the size of a large cell phone. The device reads her blood glucose level, which lets her know how much insulin she needs.

Until last summer, Alexa received insulin by injection. Her mom, Georgia Spiropoulos, estimates that Alexa has had more than 14,000 insulin injections. But she now uses an insulin pump.

The pump, another cell phone-size device, delivers insulin through a thin catheter inserted into the body. The pump administers some insulin continuously, around the clock. When Alexa eats, she presses a button on the pump that delivers more insulin.

While the pump frees Alexa from injections and helps control her blood glucose level more accurately, there are drawbacks.

“Sometimes I feel like ripping the pump off and chucking it out the window,” she says.

Alexa thinks of herself as a regular kid – with a twist.

“You’re normal, but you have got something hanging over your back every day,” she says.

Alexa is more than her disease. She’s the only girl on her school baseball team, the Green Gators. Alexa loves science and math and reads “like a maniac.” She and her best friend are “walking Harry Potter dictionaries.”

Her closest friends know all about her diabetes. “They know how to help me if I need it,” she says. “But when they think of me, they don’t think diabetes. They think reader freak.”

Alexa says one of her goals in life is to witness a miracle.

A miracle might be the Green Gators winning their league championship. How about a cure for diabetes?

Fact: Insulin keeps people with type 1 diabetes alive but does not cure the disease.

Myth No.2: Type 1 diabetes is caused by obesity or eating too much sugar.

Fact: While obesity has been identified as one of the “triggers” for type 2 diabetes, it has no relation to the cause of type 1 diabetes. Scientists do not yet know exactly what causes type 1 diabetes, but they believe that both genetic and environmental factors are involved. Eating too much sugar is not a factor.

Myth No.3: People with diabetes should never eat sweets.

Fact: Limiting sweets will help people with type 1 diabetes keep their blood sugar under control. But with advice from their doctor or nutritionist, sweets can fit into their meal plan, just as they would for people without diabetes. And there are times when sweets are a must: If the blood sugar level drops too low, sweets (or juice, or soda) can be the surest method to raise it.

Myth No.4: People with diabetes can’t engage in athletics.

Fact: Physical exercise is important for everyone’s health and is especially important for people with diabetes. Regular exercise helps lower blood sugar levels and keep them in the target range.

Myth No.5: Only kids get type 1 diabetes.

Fact: Type 1 diabetes, also known as “juvenile” or “juvenile onset” diabetes, is usually first diagnosed in children, teenagers or young adults. However, people can develop it at any age.

Fact: Though type 2 diabetes is usually diagnosed in adulthood, increased obesity and other factors have led to a recent epidemic of this form of diabetes in young adults and children younger than 10. Still, most children diagnosed with diabetes get type 1.