Loretta Church has surgery in Lexington 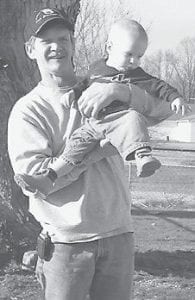 Greetings from Harrison, Ohio! “Everything is beautiful in its on way!” I just stole a line from a song, however it is the truth. I do believe spring has arrived.

The magnolia trees are so pretty along with the yellow forsythia blooming. There’s some kind of white tree that has sort of a star-shaped bloom in a couple of yards here.

The daffodils and hyacinths are beautiful. I have even seen a couple of redbud trees along the road while driving to Lexington.

My sister, Loretta Church, had surgery at the University of Kentucky Hospital at Lexington. This woman has gone through the mill. She has been through so much yet she never complains.

I drove down and didn’t leave until the next day. Loretta was in surgery longer than expected. She was in recovery until almost 11:00 that night. She didn’t want to wake up after her surgery then she slept through the night. I checked on her several times during the night.

I am glad they have shuttle bus service from the parking lot to the hospital. I took an overnight case, however I was too lazy to go get it, so I slept in a hospital gown without having to. I told Loretta we had a slumber party. Really, she did the slumbering as I was awake about every hour checking on her.

I am glad I took some fruit and soft drinks with me. The price and the quality of the food in cafeterias are terrible. I have been to enough bluegrass festivals that I can pack enough to last me for a week. Of course I do the same with things to read.

I went back to see Loretta and took a traveling partner with me, my little grandson Bennie Weiderhold. Loretta was really pleased to see him, as it was the first time she has seen him. While we there Bennie talked some for Loretta. I bought him a truck that says Back it Up! Now he repeats it and it sounds so cute.

Some of the nurses came in to see Bennie. This was the first time that I had traveled this far with him; he was really good for me. My next trip may be going to the mountains of eastern Kentucky with him.

My granddaughter, Jennifer Proctor, had a job interview at Kohl’s Department store in Western Hills and I watched my 14- month-old great-grandbaby, T.J. I pushed him in a stroller for almost an hour in the parking lot. You might say I have found a way to get in some exercise while baby-sitting.

T.J. is three weeks older than Bennie. I haven’t had enough nerve to keep Bennie and TJ at the same time.

I was singing “Walk the Way the Wind Blows” and T.J. was trying to sing with me. I really enjoyed this. My next trip may be going to the mountains of eastern Kentucky with him. While I was pushing T.J. around the edge of the parking lot, I thought of how many mothers carried their babies on their hips while walking those mountain roads going to the store or trying to get their errands done. No one back then had strollers.

Johnny and Ann Calihan have finally gone to visit her sister, Evadeen, and Laffe Marcum in West Virginia. Laffe is very sick so Ann and Johnny wanted to go spend some time with them.

The Calihans’ daughter, Sue Wagner, is a nurse and is my daughter, Angie Weiderhold’s, best friend.

Betty and Doyle Ison have been keeping busy with appointments. Belated happy birthday to Betty April 8. Betty and Doyle will probably be heading for the Smokies before long as they go every spring. One morning next week they will probably find me on the deck since it is getting so pretty of the mornings.

Sunday was Old Time Fiddler at Miamitown, Ohio. A good crowd was in attendance. Our next meeting will be May 4. There will be music on the gazebo in front of the fire department. Bring your lawn chair and come out for a few hours of relaxation. Drinks and snacks will be served. I may even dance for you!

This club has been in existence for 31 years. I really enjoy being involved in it and try to do my share to make sure it goes for many years more.

I stopped by The Whitewater Senior Center. Polly Ann (Ison)Maucher was there. I always enjoy talking to Polly Ann; we cut a rug for a little bit. Bob Bryant was there also, along with Carl Crase from Lawrenceburg, Ind. All of us are from the mountains and are proud of it. There was a good crowd gathered there. I was almost too tired to mingle too much.

Gwen Huff Farmer has been getting quite a bit of rain. She is trying to get her garden in between the raindrops.

Shirley Wells of Clarksville, Tenn., has been enjoying the company of her grandson, Robert, so we haven’t been on the computer at the same time very much.

My daughter, Kay, and her husband, Clarence Gray, are off gallivanting somewhere in Mexico for a week or so. I am glad it is them instead of me because I have no desire to go that far!

My brother, Richie Hall, is doing a lot better since he had the stents in his legs. He and Wanda are having their share of automobile trouble. As the saying goes, when it rains it pours.

My son, Keith Ballard, changed the oil in my car, rotated my tires for me, then put in new spark plugs. I must say it runs a lot better. A few days later when I came home, the first thing I saw when I pulled into my driveway was my front wheels were missing from my van. Keith had come to fix my brakes. Now I am not afraid to drive it. I am glad he is a good mechanic, and I can depend on him. At least I know he doesn’t try to add things that aren’t needed as some garages will do.

Keith picked all the brush out the yard. I just might get me a couple of goats. Then I may as well get me some chickens too.

I have a huge fifth wheeler camper that belongs to my daughter, Anna, and her husband, Scott Nottingham. It is beautiful. It cost almost as much as we paid for my house several years ago. I really don’t think they will use it that much with the price of gas the way it is.

Hello to Bruce and Levine Jones, and to my little special reader Devon Cornett and all the gang on Ingrams Creek. Hey, Clarence and Arlyn Halcomb, I hope all is well with you two.

At least I’m assuming it was the father because when I got up, mindful of the complaining bird, I looked back inside and noticed what I assume to be the mother, with her head poked out of a hole in the mess of grass and feathers. She cocked her head sideways, took in the scene, and seemed amused but not the least bit frightened by my presence.

And there’s a reason why. I have absolutely no way of knowing for sure, but I would bet a hundred dollars that she is the same mama who raised two broods of baby wrens on our front porch last spring and summer. One of these broods happened in the top of a Bluegrass Hardware shopping bag sitting on a bench on my front porch. The bottom half of said shopping bag contained about $40 worth of garden seed that I’d purchased the week before.

I had to go back to the store because there was no way I was going to disturb the wrens. I’m currently hoping that last year’s mammoth melting sugar peas, bodacious sweet corn, Roma II beans, and couple dozen bedding plant seed will sprout this spring. But that’s another story. Suffice to say that I’ve kept my seed this year in a Rubber Maid box that is not open to the feathered public.

Later in the summer, the same wrens nested in an asparagus fern hanging right beside our front door and they didn’t even complain when we carefully watered the plant while making sure the nest was not disturbed.

So I’m guessing that Mama has found a new man and that he’ll get used to me soon enough. I’m also guessing that she figures that as long as she has her nest on something important to me, she will get my attention and I’ll pay close attention to her welfare.

And, of course, she’s absolutely right. I believe I can get at least one or two knives out from under the nest without bothering the birds when the bluegill commence biting before the first of May, but the whetstone will have to stay there for the next few weeks. When the first brood finally fledges, I’ll remove my belongings and build another shelf. I intend to let the nest stay right where it is and hope it becomes a permanent home. Which is to say that I have infinitely more affection for wrens than I do for field mice.

In the meantime, I have found a rat-tail chain saw file in the garage and it has served the purpose needed by my cheese knife. The blade’s edge is a bit ragged but the good Wisconsin baby Swiss sliced thinly enough and the taste was unaffected. Come Monday I’ll venture over to Granny’s Amish Country Store on 39 between Crab Orchard and Lancaster to purchase a new whetstone and one of those dandy little sharpeners for when I’m in a hurry. There’s a bunch of other stuff I need from over there anyway and I’m betting the wrens already knew it.