Loretta Lynn feels ‘great’ at 83; no reason to quit 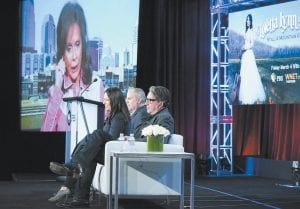 Loretta Lynn’s new record, her first studio album in more than a decade, likely won’t be her last.

“I’ve got a whole houseful of kids and grandkids, and I’m doing a lot of this for them,” Lynn said this week.

She plans to keep working “for a long time,” she said. “I feel great. I thank God every day that I’m in good condition.”

Lynn credits a lifelong abstinence from smoking and drinking. But there’s one trademark indulgence she won’t give up: The elaborately embellished dresses she wears in concerts.

“I wouldn’t go out on the stage without my gowns for nothing,” Lynn said, smiling. “They’re heavy but, hey, work’s not easy.”

The country music legend, whose early life and career were dramatized in the 1980 movie “Coal Miner’s Daughter,” is the subject of a PBS “American Masters” documentary, “Loretta Lynn: Still a Mountain Girl.”

Its March 4 airdate coincides with the release of “Full Circle,” which includes new songs and covers of previously recorded Lynn tunes including “Fist City” and “Whispering Sea.”

“I think my fans will be happy” with the mix of material, Lynn predicted, speaking to a TV critics’ meeting by satellite from Nashville, Tennessee.

“Some of our favorite moments were with Garth and Trisha … because they have a personal relationship with Loretta,” producer Elizabeth Trojian said.

“She takes her life and can make poetry out of it,” Trojian said. “It’s so beautiful and simple, and yet the most powerful work.”

Lynn, who cited her children as her proudest achievement, said she remembers how often her career separated her from them.

“That was the worst part about my singing, was leaving my kids. It was really hard and I would try to take them when I could,” she said.

Her new album was produced by Patsy Lynn Russell, her daughter, and John Carter Cash, the son of Johnny Cash.