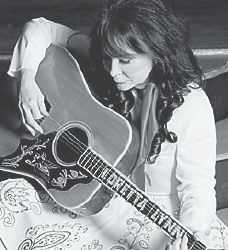 Loretta Lynn is returning to the coalfield region from which she says she left 59 years ago to find a better life.

Miss Lynn, a 72-year-old native of Van Lear in Johnson County, will visit Pikeville on March 29 to perform a concert at the Eastern Kentucky Expo Center. Tickets go on sale this Friday (January 25) at noon.

Miss Lynn, whose song “Coal Miner’s Daughter” is the bestknown of her 27 No. 1 country music singles, left eastern Kentucky for the state of Washington in 1949, when she was just 14 years old. She says she and her husband, Doolittle, left the region so he could find a job away from coal mining.

After growing up under the musical influence of her father, Tommy Webb, Miss Lynn began to sing and play music in earnest after her husband bought a guitar for her in 1954. Her first big break in the music business came in 1959, when she won a talent contest being hosted by a young Buck Owens for a television station in Tacoma, Washington.

In February 1960, less than two months after she signed her first record contract, Miss Lynn’s single “I’m A Honky Tonk Girl” reached No. 14 on Billboard’s Country and Western chart. Miss Lynn and her husband soon moved to Nashville, where she was signed to Decca Records and began performing with the Grand Ole Opry.

Miss Lynn also had several top hits with Conway Twitty between 1971 and 1981. The duo

The workings of Miss Lynn’s most memorable song began on October 1, 1969, when she and the now-legendary producer Owen Bradley went into Bradley’s studio to record the autobiographical “Coal Miner’s Daughter.” After Decca delayed the release of “Coal Miner’s Daughter” until May 10, 1970, the song appeared to be generating little interest. However, it rose to No. 1 on Billboard’s country singles chart seven months later, on December 19, 1970.

Clocking in at three-minutes and two-seconds long, “Coal Miner’s Daughter” tells the story of the 14 years Miss Lynn spent in eastern Kentucky “in a cabin on a hill in Butcher Holler.”

The song also helped form the title of Miss Lynn’s well-received autobiography, Coal Miner’s Daughter: The Autobiography. The book, co-written by Miss Lynn and New York Times reporter George Vecsey and released in 1976, was the basis for the 1980 movie “Coal Miner’s Daughter,” which starred Sissy Spacek as Miss Lynn and Tommy Lee Jones as Doolittle. The movie, large portions of which were filmed in the Letcher County communities of Mayking and Blackey, resulted in an Academy Award for Spacek. It also starred former Band drummer Levon Helm as Miss Lynn’s father and Beverly D’Angelo as Patsy Cline. It was directed by Michael Apted.

Thanks to the continued showing of “Coal Miner’s Daughter” on cable movie channels, Miss Lynn continues to attract new fans. Her credibility with young music fans rose greatly in 2004 when she teamed with Detroit rock star Jack White of The White Stripes and members of the Cincinnati rock band The Greenhornes to record her latest album, “Van Lear Rose.”

Like “Coal Miner’s Daughter,” many of the 13 songs on “Van Lear Rose,” which won a Grammy Award for “best country album” in 2005, are autobiographical. A single from the album, “Portland Oregon,” won the 2005 Grammy for “best country collaboration with vocals.”

“Van Lear Rose,” which rose to No. 2 on Billboard’s Top Country Albums chart and No. 24 on the Billboard Top 200 chart, also garnered rave reviews in publications like Rolling Stone, Blender and Spin.