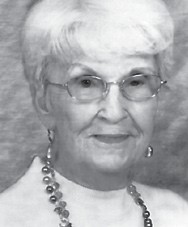 Funeral services for Loreva Banks Cornett, 84, of Norton, Va., will be held at 2 p.m. on Friday, March 18, at the First Baptist Church in Whitesburg.

Born in Seco to the late John D. and Ethel Banks, she was the widow of Van Cornett.

She was the mother of the late Mark Keith Cornett, and a sister of the late Elvina Banks, Juanita Hatton, Willis Banks, Curtis Banks and Gay Banks.

Mrs. Cornett was graduated from Whitesburg High School and was active in the graduating group, the 49ers, and was a member of the Norton First Baptist Church.

She had served as a foster grandparent for the Norton Elementary School, and was active in the Norton Com- munity Hospital auxiliary for several years.

She is survived by her daughter, Diane Cornett of Norton, Va.

In lieu of flowers, donations may be made to PAWS of Southwest Virginia, P.O. Box 576, Coeburn, Va. 24230, or a cat rescue organization.