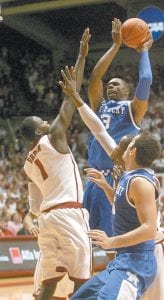 Kentucky’s Terrence Jones (3) shot against Alabama forward JaMychal Green (1) in the first half of their game at Coleman Coliseum in Tuscaloosa, Ala., on Tuesday night. (AP Photo)

Ben Eblen matched his scoring average with one free throw in the final seconds for his lone point. How Alabama’s reserve guard got to the line was much more important, though.

Eblen grabbed a steal and made one of two free throws with 2.8 seconds left to help the Crimson Tide preserve a 68- 66 victory over No. 12 Kentucky on Tuesday night.

“It was an all-out effort for everybody,” Tide forward JaMychal Green said. “ That’s what it’s going to take for us to win games.”

The Wildcats, who had nearly erased a 20-point deficit, rebounded the missed foul shot but couldn’t get a good shot off at the buzzer after back-to-back timeouts. Terrence Jones dribbled across midcourt and heaved a wild 3-pointer in traffic that caromed high off the backboard.

The Crimson Tide (11-7, 3-1 Southeastern Conference) had lost the last five meetings with the league powerhouse and is now 3-7 against ranked teams under coach Anthony Grant.

“People doubted us as a team and we’re showing them that we can play anybody and we’re a legitimate team,” said Green, who had 18 points and 11 rebounds. “It’s just a great win for the program.”

This time, Alabama surged to a 52-32 lead with a 15-2 spurt over the first 5 minutes of the second half before the Wildcats (14-4, 2-2) forced turnovers on seven consecutive possessions to spark the comeback.

Then, Brandon Knight and Doron Lamb botched an exchange on the perimeter and Eblen grabbed the ball in the final seconds.

“ We’re driving to the wing and we’re going to do what we call a pitch or a pistol, and the guy muscles Doron off,” Wildcats coach John Calipari said.

Calipari said he learned something about his team in the key sequences down the stretch.

“We had no business being in the game the way we played,” he said. “Then all of a sudden we have the ball in a one-point game and had a chance to win. I’m learning, who do I go to? We went to the wrong guys.”

On the final play, Alabama opted to leave the inbounds man, Darius Miller, unguarded and try to keep the Wildcats from catching the ball across midcourt.

“We felt like they were going to try to run something long,” Grant said. “I think they were and Tony (Mitchell) did a good job staying home and deterring whatever they had going on. We forced them to throw it short and they had to go from halfcourt and throw a heave up, which is what we wanted.”

The play was designed for Lamb to catch the ball, take a couple of dribbles and shoot from the neighborhood of NBA 3-point range.

“That was to go to Doron, so the other guy just said, ‘I’m doing this myself’ and kind of grabbed it,” Calipari said. “But that was for Doron, and Doron was open.”

The Wildcats shot just 38 percent from the floor and were held 14 points below their league-leading scoring average, stymied by a Tide defense that gives up the fewest points in the SEC. Alabama improved to 10-0 at home.

Mitchell scored 15 and helped punctuate the fast start after halftime. Alabama also made half its 14 3-point attempts, including three by Charvez Davis.

Eblen only scored one point in the game, matching his average, but had the key defensive play and helped deny Knight the ball on the previous possession.

The Wildcats were just 7 of 14 from the free throw line in the second half.

Alabama quickly extended a 37-30 halftime lead but then it was all Wildcats until the final minutes, with Jones scoring their final six points. Three times they cut Alabama’s lead to one, but they couldn’t overtake the Tide.

“I thought we got caught up in the emotion of the game, and we wasted energy,” Grant said. “We had guys that were cramping up. Fatigue set in and we made some mental errors. Kentucky is a very, very good basketball team and we knew they would make a run.

“From a mental standpoint, it kind of got to us. We didn’t handle it well.”

The Tide regrouped for the final stops, though.

Alabama’s Senario Hillman took a charge with Knight driving for the goahead basket with 40 seconds left. Deandre Liggins then returned the favor with Hillman, drawing a charge to give Kentucky the ball back in the final 11 seconds.

“When we get muscled and manhandled, this is what you see,” Calipari said.