Loss to IU will help Cats 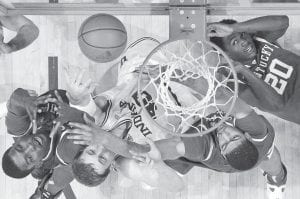 Indiana’s Cody Zeller, center, put up a shot against UK’s Michael Kidd-Gilchrist and Anthony Davis as Doron Lamb looked on during the second half of their game in Bloomington, Ind. Indiana won 73-72. (AP Photo)

Hopefully no member of Big Blue Nation jumped into any of the Commonwealth’s 19 gorgeous state park lakes or off any of eastern Kentucky’s beautiful mountaintops after the University of Kentucky’s last-second loss at Indiana on Saturday.

The Wildcat players and coaches are alive and well this week and working to get better at the Joe Craft Center. Life goes on for them. Life should go on for the fans as well, especially those who can’t see the benefit at this point of a loss like the one at Indiana that toughens up teams like UK for the March Madness run.

Having played through the atmosphere that UK did in Bloomington makes those neutral site games in the NCAA tourney feel like playing in Rupp Arena as they go through the various levels of tournament play, because the vast and loyal fan base that follows UK will always garner enough tickets to make its presence felt in postseason play.

Is it the best of times for the Cats to be taking semester exams? Probably not, but when is studying convenient for today’s college students? Fear not, Big Blue Nation and Coach John Calipari, because Bob Bradley and the folks over at the CATS Center will make sure their job in Wildcat athletics is performed well, and that job is to make sure basketball players and all athletes are well prepared for their semester exams. They have done a super job for many years and rarely get recognition for their work, but the UK players all know how important and accommodating Bradley and his staff members are.

The problem, or should I say concern, for this young Wildcat roster is that the NCAA-mandated 20-hour-per-week practice rule is dropped the day each student-athlete has his or her last exam and doesn’t come back into play until the second semester of classes resumes around Jan. 5.

What does that mean for the Cats?

It means a lot of time between the lines on the Joe Craft Center practice floors and with only three low-ranked opponents before Christmas, you can lay money that Coach Cal is preparing a part of each practice from today until Jan. 31 for his Italian friend down I-64 In Louisville. You can also rest assured that Coach P is saving a few special moments of his day for Cal and the Cats as well.

Bottom line, if you’re a UK player, losing your first game of the season one or two days before the 24/7 practice routine becomes available for your coach isn’t a very pleasant experience to which to look forward. Trust me on that one.

Anybody out there think Coach Cal still should be concerned after the Indiana loss about having too many big game scenarios for freshman to deal with in the early season — you know, the controversy that he started through his Twitter account several days ago?

Yes, he probably does, but he should have known what he signed up for. Now in his most glorious days as the leader of the Kingdom of Blue is not the time to start wiggling on longtime traditions on which the program was built.

Personally, I think the whole scheduling controversy Cal has created is about two things:

No. 1 — The possibility of having to beat a longtime close friend in the coaching fraternity such as Tom Crean or Roy Williams.

No. 2 — The possibility of losing to a guy you once were jealous of and now you’ve grown to for various reasons that can’t be accurately validated (Rick Pitino).

In my eyes, either scenario is making decisions concerning your team and school based on personal reasons instead of just about Kentucky basketball.

To my knowledge, Adolph Rupp, Joe B. Hall and Eddie Sutton never scheduled a game at UK for any other reason than the betterment of the total program including fan interest. By the way, Joe B. took them all on, even after he was forced into playing Louisville.

Remember those years when UK played Louisville and Indiana and/or Kansas and/or North Carolina and Jerry Tarkanian’s UNLV Running Rebels or Guy Lewis and his Phi Slamma Jamma teams at Houston? And that’s not to mention those tough teams the Big Ten used to produce, such as Illinois. And what about those time-honored matchups each holiday season with Digger Phelps and his Notre Dame Fighting Irish?

Oops, I forgot another one. What about the Big Four Classic UK annually participated in at the Hoosier Dome?

Also, let’s not forget the Southeastern Conference in those years was at its peak in hoops, producing quality NCAA tournament-type competition at Auburn under Sonny Smith and Hugh Durham at Georgia and Norm Sloan at Florida and the Ernie and Bernie show at Tennessee and Wimp Sanderson at Alabama. Oops, I also forgot Dale Brown and his 20 years of solid basketball at LSU as well.

Simply and painfully put, in those days the SEC was putting players in the NBA at a similar rate it has been stocking the NFL in recent years.

I rest my case.

Past UK coaches have all had their fair share of battles in the scheduling department with various UK athletic directors during their eras, but they all ended up playing for the most part “The Big Three” that Coach Cal wants to cut to the terrific two.

Having spent eight summers in the late ‘80s and ‘90s alongside Pitino and still in touch fairly often with his associates at Louisville and also having a few coincidental family contacts with the Calipari camp, I can attest to the fact that these two coaching icons seriously don’t want to continue the UK-Louisville series, but both also know it would be seriously damaging to both coaches and their schools in the all important public relations department.

So with the Battle of the Bluegrass being pretty much agreed on into the future, let’s just see if we can come to a common ground with Coach Cal.

How about signing a series of four-game contracts with Indiana and North Carolina over an eight-year span and playing each one every other year and keeping the Champions Classic intact (UK-Michigan State-Kansas- Duke)? That scenario will give us fans at least three big non-conference December games (one at home, one on the road, and one at a neutral site) instead of the four we presently get.

It will also allow Coach Cal to say he won another battle with the powers that be.

Columnist Ira D. Combs lives in Jeff in Perry County, where he operates Tri-States Sports with his brother, Harold Combs.