Lost bird to be returned to owner

Was last seen at funeral more than 200 miles from here 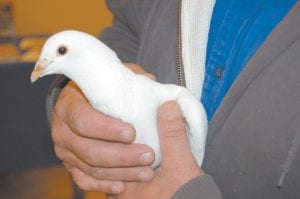 THE LONG WAY HOME — A homing pigeon lost from the West Virginia town of Leslie, located more than 200 miles from Letcher County, rested in the hands of master falconer Mitch Whitaker earlier this week. (Eagle photo)

A homing pigeon which became lost after a funeral service in West Virginia two weeks ago was found in Cram Creek, more than 200 miles from its coop.

Richard Craft said his wife was looking out a window on Nov. 28 when she saw a solid white pigeon pecking at straw near a baby Jesus in their nativity scene. Craft caught the bird with a fishing net and put it in a box in his garage. The pigeon didn’t appear to be hurt so the next day Craft released it. Craft watched the bird fly away, but then the next day it came back and was hanging around the nativity scene again.

“It just walked around out there,” said Craft. “It wasn’t afraid. It was a but what else can you do with this economy? If they’re getting ready to go bankrupt, it’s better to cut back than to go totally bankrupt,” said Deborah Butler of Brandywine, Md., who was at a Washington, D.C., post office. “You still need them. Because everybody can’t afford the other ones, like express mail and things like that. Even though the world is computer literate, everybody doesn’t have computers.”

At a news briefing in Washington, postal vice president David Williams said the post office needs to move quickly to cut costs as it seeks to stem five years of red ink amid steadily declining mail volume. After hitting 98 billion in 2006, first-class mail volume is now at less than 78 billion. It is projected to drop by roughly half by 2020.

The agency already has announced a 1-cent increase in first-class mail to 45 cents beginning Jan. 22.

Williams said in certain narrow situations first-class mail might still be delivered the next day — if, for example, newspapers, magazines or other bulk mailers are able to meet new, tighter deadlines and drop off shipments directly at the processing centers that remain open.

But in the vast majority of cases, everyday users of first-class mail will see delays. The changes could slow everything from check payments to Netflix’s DVDs-by-mail, add costs to mail-order prescription drugs and even threaten the existence of newspapers and time-sensitive magazines delivered by postal carrier to far-flung suburban and rural communities.

The Postal Service faces imminent default — this month — on a $5.5 billion annual payment to the Treasury for future retiree health benefits and expects to have a record loss of $14.1 billion next year.

“Are we writing off first class mail? No,” Williams said. “Customers are making their choices, and what we are doing is responding to the current market conditions and placing the Postal Service on a path to allow us to respond to future changes. We have to do what’s in our control to put the Postal Service on sold financial ground.”

The cuts would close 252 of the nation’s 461 mail processing centers beginning next spring. They would result in the elimination of roughly 28,000 jobs. The number of employees varies by processing facility but generally ranges from about 50 to 2,000. Cincinnati, Boston, Orlando and New Orleans are home to some of the largest centers.

Because the consolidations typically would lengthen the distance mail travels from post office to processing center, the agency also would lower delivery standards. Currently, first-class mail is supposed to be delivered to homes and businesses within the continental U.S. in one to three days. That would lengthen to two to three days, meaning mailers no longer could expect next-day delivery in surrounding communities. Periodicals could take two to nine days.

The Postal Service initially announced in September it was studying the possibility of closing the processing centers and published a notice in the Federal Register seeking comments. Within 30 days, the plan elicited nearly 4,400 public comments, mostly in opposition.

Catalogue companies worry they won’t be able to predict when their catalogues will arrive and therefore when to add staff to handle increased call volumes. Small business owners say sluggish first-class mail will slow their businesses because merchandise and payments will spend more time in transit.

On Monday, postal customers said they valued having mail service but also acknowledged the realities of the Internet in everyday life.

“The post office services that we need as a nation are just too big at this point, so things have to be cut and there is nothing that can be done to change it other than email goes away,” Ron Connor of Naperville, Ill., said as he walked into a local post office branch.

Lily Ickow, from Silver Spring, Md., said the post office needs to find other ways than wide-scale cuts to reach profitability. “It’s definitely too bad,” she said at a Washington post office. “I think the Postal Service is necessary personally. …It would be useful to see if there are ways that they could innovate and come up with other types of services.”

Separate bills that have passed House and Senate committees would give the Postal Service more authority and liquidity to stave off immediate bankruptcy. But prospects are somewhat dim for final congressional action on those bills anytime soon, especially if the measures are seen in an election year as promoting layoffs and cuts to neighborhood post offices.

Postmaster General Patrick Donahoe has been pushing for congressional changes that would give the agency more authority to reduce delivery to five days a week, raise stamp prices and reduce health care and other labor costs.

But the agency also opposes current provisions in the House and Senate legislation that would require additional layers of review before it could close post offices and processing centers.

The Postal Service, an independent agency of government, does not receive tax money, but is subject to congressional control on major aspects of its operations. The changes in first-class mail delivery could go into place without permission from Congress.

Maine Sen. Susan Collins, the top Republican on the Senate committee that oversees the post office, believes the agency is taking the wrong approach. She says service cuts will only push more consumers to online bill payment or private carriers such as UPS or FedEx, leading to lower revenue.

The Senate bill would refund nearly $7 billion the Postal Service overpaid into a federal retirement fund, encourage a restructuring of health benefits and reduce the agency’s annual payments into a future retiree health account. No other agency or business is required to make such health prepayments.

Dennis Kucinich, D-Ohio, a member of the House committee that oversees the agency, said he would fight the postal changes.

“This privatization plan is bad for Americans, bad for businesses, bad for the economy and bad for workers. We can do better than to dismantle the Postal Service and privatize its operations,” he said.

Ruth Goldway, chair of the Postal Regulatory Commission, said the commission will be reviewing the proposal closely to ensure that the Postal Service can continue its mission of providing adequate, effective service in a fair manner to all parts of the U.S. She said, “I think if the Postal Service does not respond to public concerns, it will bear the consequences of that itself.”

The Postal Service will discuss the proposed closing of the Hazard center during a public meeting tonight (Wednesday) at the Hazard Forum between 7 and 9 p.m.

Persons who can’t attend the meeting but wish to submit comments in writing can send them to: Manager of Consumer and Industry Contact, Kentuckiana District, P.O. Box 31631, Louisville, Ky., 40231-9631. Comments will be accepted through Dec. 22.

The Postal Service announced earlier this year that it intends to close nine small post offices in Letcher County. A tenth office, at Ermine, was closed on Sept. 1.

The Postal Service said it will save $442,090 in employee costs and $48,333 in maintenance costs by closing the Hazard center.