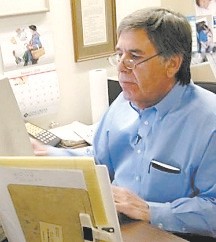 GISH AWARD WINNERS – Stanley Nelson and the weekly Concordia Sentinel of Ferriday, La., named a living suspect in the 1964 killing of an African American businessman.

Stanley Nelson and the weekly newspaper he edits, the Concordia Sentinel of Ferriday, La., are the winners of the 2011 Tom and Pat Gish Award for courage, integrity and tenacity in rural journalism.

The Institute for Rural Journalism and Community Issues, based in the School of Journalism and Telecommunications at the University of Kentucky, presents the award in honor of the couple who published The Mountain Eagle for more than 50 years. Tom Gish, who died in 2008, and his wife Pat were the first recipients of the award.

Nelson and the Sentinel showed courage and unusual tenacity in investigating an unsolved murder from the era of conflict over civil rights, and in January 2011 named a living suspect in the 1964 killing of African American businessman Frank Morris. A grand jury was convened and continues to investigate.

A prosecutor on the case, David Oppeman, told James Rainey of the Los Angeles Times, “I told Stanley the other day he is the hub in this and everybody else is just a spoke. He did the work that needed to be done.”

The newspaper showed integrity and courage in the face of reader resistance to its dogged, detailed reporting in more than 150 stories. “The owners of the Concordia Sentinel never hesitated in following the story,” Nelson wrote in the fall edition of Nieman Reports, of the Nieman Foundation for Journalism at Harvard University.

“While most readers read the stories with interest and outrage over what happened so many years ago, many of the most vocal were those who detested the coverage and who questioned our motives,” Nelson told the Institute for Rural Journalism and Community Issues.

“ We knew some would be angered to read about the parish’s ugly racial past,” he wrote for Nieman Reports. “Some canceled subscriptions. We were threatened. Our office was burglarized. One irate reader called to find out my ultimate goal. ‘To solve a murder,’ I said. ‘You can’t do that,’ she snapped. ‘You’re just a reporter!’ She hung up. We pressed on.”

Nelson said in the latest edition of Columbia Journalism Review that he was following the example of the late Sam Hanna Sr., the Sentinel’s editor-publisher, who taught him that it was the newspaper’s duty to ask tough questions. When he saw the Morris case on a 2007 FBI list of unsolved civilrights murders, he knew “It would be morally irresponsible not to learn more, write more, and see who was accountable.”

“Mr. Nelson’s four-year effort certainly demonstrates the courage, tenacity and integrity the award was set up to acknowledge,” said Ben Gish, editor of The Mountain Eagle, son of Tom and Pat Gish, and a member of the award selection committee.

Nelson and the Sentinel were nominated by Albert P. Smith Jr., co-founder of the Institute and chair of its national advisory board. A former weekly newspaper editor and publisher in Kentucky and Tennessee, Al Smith recalled his early days as state editor of The Times-Picayune in New Orleans, handling news from the Ferriday area, which he said was “known on both sides of the Mississippi River for a tradition of violence, prostitution, gambling, and corrupt cops and judges.

“Nearly 50 years later, I still shudder when I think what life was like for a threatened black person there, or a reporter who took risks for a story. I offer this nomination with a profound respect for all in journalism, law enforcement, political office and civic activism who have changed the culture and improved the administration of justice in Ferriday and Concordia Parish.”

“We at the Sentinel are certainly humbled by being honored with the Gish Award, which recognizes the role community newspapers across the country play in advocating justice for all,” Nelson said. “The award is also a great tribute to the Hannas, one of Louisiana’s great newspaper families.” The Hannas also publish the Franklin Sun in Winnsboro and the Ouachita Citizen in West Monroe.

The Gish Award is not the first for Stanley Nelson. He won the first Courage and Justice Award from Louisiana State University’s Manship School of Mass Communication, was a finalist for this year’s Pulitzer Prize in local reporting, and won a 2011 Payne Award for Ethics in Journalism from the University of Oregon. The Payne judges cited “the huge social, economic and political pressures on a paper in the South to keep a racially motivated killing in the past. This is as pure a definition of journalistic courage as one could craft in 2011.”

The pressures on a rural, weekly newspaper are usually greater than those on its metropolitan cousins, because such newspapers have small staffs and small revenue bases, and are thus more vulnerable to advertiser and reader boycotts, upstart competition and peer pressure, said Al Cross, director of the Institute for Rural Journalism and Community Issues. “The Hanna family has set a fine example, and not just for weekly publishers,” he said. “The courage, integrity and tenacity displayed by the Sentinel and Stanley Nelson are examples for everyone in journalism to follow.”

Besides Tom and Pat Gish, other winners of the award have been the Ezzell family, publishers of The Canadian (Tex.) Record, in 2007; former publisher Stanley Dearman and Publisher Jim Prince of The Neshoba Democrat of Philadelphia, Miss., in 2008; and Samantha Swindler, editorpublisher of the weekly Headlight Herald in Tillamook, Oregon, for her work as editor of the daily Times-Tribune in Corbin, Ky., and managing editor of the Jacksonville (Tex.) Daily Progress, in 2010. No award was made in 2009.