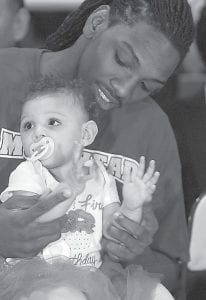 The last thing Pitino wants to worry about is why the Cardinals received the No. 4 seed in the Southwest region in the NCAA tournament.

“I’ve had to answer stupid emails about how could Syracuse be ranked ahead of us, it’s taking my time, and getting under my skin, so I don’t care.”

The Cardinals do care about the 6-foot-8 Faried, who leads the nation with an average of 14.5 rebounds per game.

Pitino knows containing Faried will be a challenge.

“He rebounds more than our two centers and our power forward combined, so how difficult is that?” Pitino said. “It’s a very diffi cult assignment for any team, not only us, because our Achilles’ heel has been rebounding, now we’ve got the greatest rebounder in the history of the game to go against.”

Jennings and Gorgui Dieng and forward Stephan Van Treese — have a total of 415.

“He’s a Dennis Rodman,” Pitino said. “He has unbelievable passion for rebounding, great lowpost defensive player. … He has, technique wise, all the things you want to see in a great rebounder. He knows how to go baseline-out. He knows how to change position to come out of his test tube. He knows how to get position from a guy’s back, and he’s relentless. The only time he rests on the court is on a free throw and on an underneath out-of-bounds play he’ll cop 5 seconds.

“Outside of that he doesn’t rest on the basketball court.”

Meanwhile, Pitino wants to put to rest any talk that his team is underseeded after a surprising season in which the Cards began unranked but ended up finishing third in the Big East during the regular season and runner-up in the league’s postseason tourney.

“All that stuff is for ESPNU late at night when you have no life,” Pitino said. “We’re extremely proud where we are. We don’t do anything about political elections, we just worry about basketball.”

Morehead State and Louisville are familiar with each other, and similar in some ways.

The Cardinals clobbered Morehead State 74-54 in the first round of the 2009 NCAA tournament in Dayton after leading by just two points (35-33) at halftime.

“We were up two (at halftime) the last time we played them with two lottery picks (Terrence Williams and Earl Clark) and the (tournament’s overall) No. 1 seed,” Pitino said. “They’re a much better team now because their better players are seniors and we’re not as good as that team and we understand that, from a physical standpoint.”

A couple of years ago the two coaching staffs traded notes and ideas.

“Their defensive system is as close to ours as any other basketball team, they’re almost twins,” Pitino said. “Now their offense is a lot different than ours, but defensively we’re twins.

“They’ve got great talent, great experience and we have ourselves one tough ball game.”