University of Louisville’s offi cial entry to the Atlantic Coast Conference last week is, I think, the state’s most important sports story of the new millennium.

Among the high, if least mentioned, positives: Economic impact possibilities regionally; and, the nearest NBA franchise will remain at a distance, Indianapolis.

“Rick Pitino could charm the gold out of your teeth and not even leave you a toothache,” a friend said a while ago.

If a poll were done ranking most eloquent ball coaches of our time, on any list, Pitino would be first, and second, with everyone else tied for third.

In this context, Pitino gave fans a mini-seminar in charm last week. When a Louisville Courier- Journal reporter asked him a may-I-kiss-your-ring question about joining the ACC: “What will it be like to be part of this coaching Mount Rushmore, Mike Krzyzewski, Roy Williams and Jim Boeheim?” Pitino apparently resisted gagging and a Pontiff-onhigh response too. 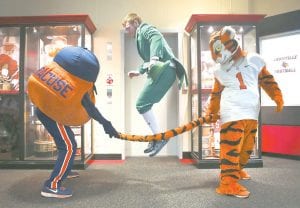 Syracuse mascot Otto the Orange, left, used the Clemson Tiger’s tail as a jump rope for Notre Dame’s Leprechaun before the start of the ACC news conference in Louisville last week. After bouncing around in three other leagues over 19 years, UofL is now a part of the ACC. (AP Photo/The Courier-Journal)

“… The programs are much bigger than the coaches,” he answered. “North Carolina, Syracuse, Duke and Louisville stand far above the coaches.”

Above the coaches. Nicely correct.

Then, a response to another question put him and UofL in stark contrast with our state’s other basketball Titan down I-64.

Q. The other benefits of going to the ACC?

Pitino waxed collegial and slipped in a genuflect to UofL president Dr. James Ramsey, whose new mission is finding ways to compete with Academia’s big dogs.

“We’re also going to take off academically,” he said. “We’re looking to really improve our image academically. So, instead of (being) middle of the road we become an elite university academically …”

Compete with Wake Forest, Duke and Boston College, “because they’re all premier programs.”

Deciding if Pitino’s remarks are genuine or coach-speak baloney is your option. That he used his bully pulpit to mention academic growth, becoming an academic rival for Boston College and the rest, is, well, charming.

Louisville’s membership in the Atlantic Coast Conference is one of the most remarkable journeys in college conference history.

Once upon a time, Coach Peck Hickman’s Louisville’s basketball team played Western Kentucky for the Ohio Valley Conference championship. That was 55 years ago. The Hilltoppers won.

Dunk contests. Most all-star game watchers believe they’re a waste of time and much ado about nothing. The following fan view says it all:

“This sort of gaga nonsense ranges between disgust and ‘how stupid is this?’ A dunk shot. Two points. Not three, but TWO points.

“Entertainment? It’s a sham, a scam, a joke, an example of dumbing down America by media-types probably too short, too fat and too easily impressed — gone bonkers when a big ole kid in short pants shows off his ‘ME game’ in a team sport with a 3-6-0 or a pogo-stick, or a high flyer, and now a jawdropper between the legs dunk! So what? Still TWO points.”