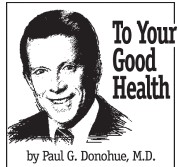 DEAR DR. DONOHUE: I am going buggy — literally. My 5-year-old kindergartener has head lice. I discovered them because he started scratching his head. It makes me sick to my stomach to think about this. I can’t imagine where he picked them up. Is the entire family destined to come down with them? I have four other children, two dogs and a husband. Help. — B.C.

ANSWER: Head lice cause mothers more consternation than just about any other illness. For the record, head lice don’t transmit any illnesses. They do cause itching and scratching. They’re not a reflection of your cleanliness. Most likely your child picked them up at school from head-to-head contact or from sharing caps, brushes or combs.

The head louse is only 3 mm (0.12 inches) long. They’re difficult to see. The female louse lays her eggs at the base of the hair and glues them to the hair. The eggs are called nits. They hatch in about eight days. Nits found within a quarter of an inch from the scalp indicate active infection. If they are farther away, the infection is not likely to be active.

Treatments for head lice are many and usually quite effective. Advisory bodies promote permethrin (Nix) as the treatment of choice. It calls for reapplication in one week to 10 days. Malathion lotion (Ovide) is another reliable cure. Benzyl alcohol (Ulesfia Lotion 5 percent) is another good treatment that is applied to dry hair and then rinsed off. Natroba (spinosad) Topical Solution was approved recently as a head lice treatment. Both these latter two medicines need a prescription. You have many choices. Some of these treatments include combing the wet hair with a fine-toothed comb to get rid of nits.

You do not have to treat other family members if they show no signs of infection. Pets are safe; human head lice don’t like them. The only household cleaning necessary is vacuuming chairs and carpets where your 5-year-old has been. Clothes he has worn in the past two days need to be washed in hot water and dried with maximum heat. Lice that are off the head live for only two days.

DEAR DR. DONOHUE: Some time ago, you wrote about a shrunken leg that was shaped like some kind of bottle. It has the word “teeth” in it. I have a dropped foot. My doctor doesn’t know what I am talking about but would like to see the article. Will you repeat it? — I.D.

ANSWER: The “teeth” in what I wrote referred to Dr. Tooth, an English doctor whose name is part of a nerve illness called Charcot (SHAR-coe)-Marie- Tooth disease. In spite of the fact that the name draws a look of puzzlement from most people, it’s the most commonly inherited nervemuscle disorder.

The illness usually shows itself in teen years, but it can take many years before it’s diagnosed. The lower leg muscles become quite thin, so the leg looks like an upside-down champagne bottle. It makes walking difficult. People stumble. Often, they cannot lift the foot fully off the ground — a dropped foot.

A number of different varieties of this illness exist. I’ve described the most common one. ©2012 North America Synd.