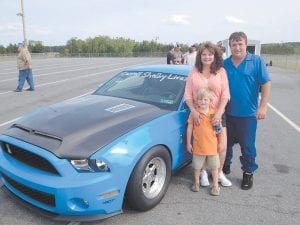 RandyThomas, his wife and son are photographed with the 2010 Shelby Cobra GT500 he bought for about $50,000. Since then, he’s added thousands of dollars worth of bolt-on power adders to his factory iron motor. This photo was taken at South Georgia Motorsports Park in Valdosta, Ga.

Randy Thomas never could help but go fast in his blue 1966 Ford Mustang, but he knew the outcome as a teenager.

Too many traffic violations for speeding and street racing and he’d be forced to park the speed machine and ride his bike to school. The fact that his step dad, Billy Wilkins, was a major with the Paducah Police Department made matters so much worse.

“The officers were thrilled to catch me,” Thomas said, likening it to a game of cat and mouse, “and they would give me a ticket and tell me to go give it to my dad.”

In the spring of 1983, Thomas collected 23 traffic violations which prompted a lifestyle change. Thomas worked his circumstances and changed the Mustang to a bona fide drag racing car.

Now 48, Thomas’ need for speed and competition is controlled through his collection of four gleaming Ford Shelby Cobra GT500s which he houses in a garage he calls “The Snake Pit.” Of course, the nostalgic 1966 with patches of rust and dust sits in the corner, and a blue 1984 Thunderbird is the odd car out in the collection.

After starting a family in the 1980s, Thomas said he became burned out on racing and turned to professional bass fishing and golfing to feed his competitive fire. But once Ford debuted the retrostyle Mustang in 2005, Thomas couldn’t help but get back into the sport.

His pride and joy is a bright blue 2010 Shelby Cobra GT500 he bought from a man in Pennsylvania for about $50,000. Since then, he’s added thousands of dollars worth of bolt-on power adders to his factory iron motor.

“You can put your money either in the bank or in the stock market,” Thomas said, “but these aren’t going anywhere. To me I’d rather have the cars and have the fun.”

The completely street legal car with the radio tuned to the Christian station 90.1/KLOVE can produce 1,200 horsepower and weighs 4,100 pounds with the driver. And Thomas still hasn’t managed to learn how to talk his way out of a traffic violation long after his teenage days have drifted past.

Thomas, who owns Thomas Collision, as well as the black tire burnout marks on the nearby roads, said his staff at the auto body shop works like a team to help get the ponies in the stable prancing.

“We’ll make sure work is done first, then when it comes time to race we’ll just gang up and work at night or through the weekend,” Thomas said, “and they get me out of here and they go back to work.”

Thomas recently put the car up against the likes of Keith Murt’s COPO Camaro a few weeks ago at Beacon Dragway’s Ford vs. Chevy night, with the winner pledging his $10,000 proposed purse to charity. On the first pass, exhaust issues kept the Cobra from finishing strong. On the second pass, Murt’s car broke its transmission. Both drivers plan for a rematch in the fall.

At specialty drag races across the country including Mustang Week in Myrtle Beach, S.C., and Pony Wars in Valdosta, Ga., Thomas has won numerous awards. At quarter-mile drag strips, the car can run 158 mph in 8.89 seconds and at an eighth-mile track, like Beacon, has been clocked at 123 mph in 5.75 seconds.

Much of his winnings at the events have been donated to charities, he said.

Son Michael Thomas grew up riding in the back of the 1966 Mustang, a wooden platform built to hold his car seat between the roll cage and his bottles being warmed on the manifold.

“I remember banging into the quarter panels on this one (the Thunderbird) where he had Armor All-ed the seats and I’d slide from one end to the other,” Michael Thomas said. “I was old enough to ride in that one and remember it.”

Michael, who races a 1979 red Mustang in bracket drag races, does much of the heavy lifting on the cars since Randy underwent back surgery, and the pastime has become family oriented with Randy’s wife Jenny and 7-year-old grandson taking part in the racing events.