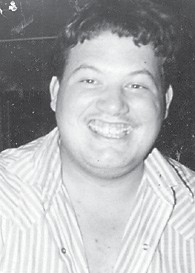 In a few days it will be what would have been our beloved son’s 46th birthday; Feb. 26. We owe it to him to see that he is not forgotten. On Feb. 26, 1971, the home of Relon and Adeline Hampton was blessed with the birth of their second son, and they named him Steven Brian. He weighed in at 8 pounds, 6 ounces, and was destined to be heavy all his life. He was a jolly baby and when he laughed he shook from his head to his toes. From an early age he was taught to live by and with the Ten Commandments. Steve cleared many obstacles in his short life but with the help of God, he made it. He learned the evils of Satan and about God’s offered mercy. Steven (Steve) grew into a fine young man and was loved by all who knew him. Because of a shattered right ankle he was told he couldn’t become a miner, but he did and made an excellent and reliable worker, even though he walked with a limp. I encouraged Steve in all his endeavors. I studied with him in the classroom and out. I even took him to the cabin at Lake Cumberland, where we studied for his mine electricians’ exam together, and I too had my green cards to work underground or surface mines. Two of my sons, Steven and his younger brother, traveled to Grundy, Va., five days a week to get the required time in the mines to become a green hat miner, or beginning miner. I worshipped, hunted, camped, and fished with Steven. Sometimes we just walked and talked and enjoyed God’s creations. Steve always wanted to share anything the Lord blessed him with no matter how meager, and felt offended if his offer was rejected, whether it was just part of a bologna sandwich, a PB and J cake or some soda, or even his favorite, chocolate gravy He never met a stranger and trusted everyone. He valued his friends and always stood up for the underdog, the lowly. He was humble and his feelings were easily hurt. He got joy from giving instead of receiving. The Bible says if you have two coats, give your brother one. You have to determine who your brother is. Steven lived his life according to that passage. Christmas was his favorite time of year. Remembering what God had given, he loved to buy gifts for the little ones and take pictures of their happy faces as they opened their gifts. He didn’t like to see anyone unhappy, especially little ones, and if they cried he cried with them. And he was quick to remind people that God loves them, even when they are down in the valley of despair. Steve loved flea markets and yard sales, and if he needed something he would try to find it in these places first. If he couldn’t, only then would he consider purchasing it new. He would help anyone in need, not expecting pay, only their friendship. He had what many other folks need but don’t have, and that is compassion for others. I was proud to have him in our church because I had seen the change and knew he belonged there. After he became disabled while working in the mines and could no longer work for his family, he became addicted to prescription pain medicine, but he overcame that obstacle too, long before his death. His death was sudden and unexpected, but he left a legacy behind that will live on and on, which we are so proud of; a legacy of love and compassion. There will never be another like our beloved Steven, and we are proud to say he was our son, and look forward to seeing him again on Judgment Day.

Written by one who lived him and knew him best, his father, and brother in Christ, Relon Hampton